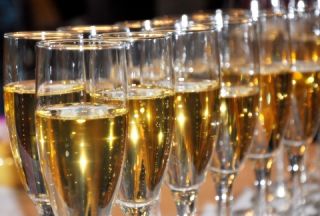 Good bubbly gets its perfect balance of tartness and sweetness from a cocktail of important climatic factors.
(Image: © Ross Toro, LiveScience Contributor)

As partiers around the world cheer to the New Year this evening, many will enjoy a crisp burst of fizz to the nose before gulping down a tart glass of bubbly.

Though not likely on the forefront of their brains, these drinkers have climatological factors to thank for the tastiness of their drink.

The quality of sparkling wine — including France's famed champagne, Spain's cava, or Italy's prosecco — depends on numerous factors ranging from soil type to bottling practices. But climate and weather patterns are amongst the most influential of these factors, driving the difference between a sub-par and high-class bottle of bubbly. [6 Unexpected Effects of Climate Change]

Grapes destined to become sparkling wine are picked before they are fully ripe, while still small and tart and containing less sugar than standard non-sparkling wine grapes. The moment the grapes reach their perfect balance of tartness and sweetness depends on more than just a matter of time, though: Precipitation also plays an important role.

If a crop experiences heavy rains late in a growing season, berries grow too quickly and the flavorful compounds within the fruit become diluted, resulting in a bland final product. Some fruits may even burst, making them prone to infection.

On the other hand, too little water early in a season slows photosynthesis — the process by which the grapevines create sugar — and can delay ripening, causing the final product to taste unpleasantly tart.

Grapes grow in fairly mild climates and suffer during bouts of extreme cold and heat.

During heat waves, fruits become susceptible to ripening prematurely. Since grapes become less acidic and more sweet as they ripen, speedy ripening prevents them from developing their full flavor, and can result in an unpleasantly sour taste.

Research conducted in northeast Spain has shown that prolonged heat waves in which temperatures reach at least 86 degrees Fahrenheit (30 degrees Celsius) result in nearly universally poor quality bottles of cava, according to a 2011 report in the International Journal of Biometeorology.

Cloud cover can slow photosynthesis, which — as with drought and excess heat — limits sugar production and can produce a tart fruit.

Generally, wine grapes benefit from relatively warm, stable weather. As climate patterns become more erratic and vegetation zones begin to shift northward within this century, as predicated by climate scientists, vineyards may face more erratic crop qualities; in addition northerly regions that have not traditionally been able to produce the delicate grapes destined for bubbly — such as southern regions of England —  may become more suited for this industry.