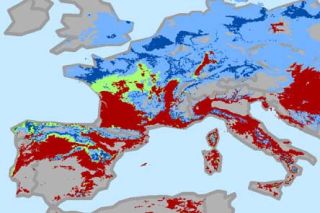 As wine-producing regions in France, Spain and Italy shrink (shown in red), new areas may open up in northern lands (shown in blue).
(Image: © Conservation International)

The wine-producing regions of the world are under threat from global warming, suggests a new study published in the journal Proceedings of the National Academy of Sciences (PNAS).

As the planet continues to warm and regional climates change in yet-to-be-determined ways, viticulture experts are striving to forecast how grapes will fare under new conditions. [Top 10 Surprising Results of Global Warming]

And while researchers assumed there would be some changes to the climates of wine-growing regions by 2050, even they were surprised by the drastic alterations shown by an array of climate models.

"We expected to see significant shifts, but we didn't expect to see shifts like these," Lee Hannah, a senior scientist at Conservation International and co-author of the PNAS study, told the Guardian.

Vast swaths of France, Spain and Italy would become inhospitable to wine grapes by 2050 under the researchers' projections. Likewise, most of Australia's wine regions would be too hot and dry for grapes, and wines from California's famed Napa and Sonoma valleys would disappear from store shelves.

"The fact is that climate change will lead to a huge shake-up in the geographic distribution of wine production," said Hannah.

Some existing vineyards in familiar wine regions could continue to operate, but would probably need additional imports of irrigation water — already a vexing issue and not likely to get any easier as the planet gets hotter, the Atlantic reports.

Beyond the agricultural concerns, however, lies an even knottier issue: the development of prime wildlife habitat. Many of the areas projected to be potential wine-producing regions are also the last refuge for endangered animals.

China, for example, now imports most of its wine, but it may decide to plant more of its own domestic vineyards in the future, the Atlantic reports.

However, China's prime wine regions are projected "to be in the same mountains that are habitat for giant pandas, so wine expansion in China may have repercussions for what is arguably the world's most iconic animal," Hannah said in a Conservation International blog post.

The grizzlies, moose, pronghorn antelope and wolves of America's Yellowstone region could also face considerable pressure if new vineyards begin to crowd them out of their ever-shrinking habitat, the New York Times reports.

There are, however, conservation initiatives that could ease the pressure on endangered plants and animals, such as South Africa’s Biodiversity & Wine Initiative (BWI).

The BWI works in collaboration with South Africa's wineries and conservationists to protect the habitat in the Cape Floral Kingdom, a UNESCO World Heritage site and a biodiversity hotspot — as well as a superb area for vineyards.