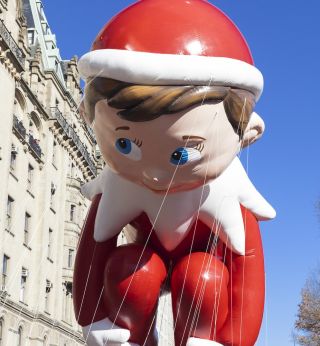 The children of North America have a new Christmas tradition: The elf on the shelf.

Alternatively panned as creepy and adored as a fun holiday ritual, the trademarked Elf on the Shelf dates back to 2005, when author Carol Aebersold self-published a tale of a little elf sent by Santa to report on children's behavior leading up to Christmas. A toy elf sold with Aebersold's book plays that role in thousands of homes around the country.

It's a strange place to end up for these Christmas-y little creatures, who once stood side by side with Norse gods and took the blame for inexplicable illnesses in medieval Europe. But elves stand the test of time, playing modern-day roles in J.R.R. Tolkien's "Lord of the Rings" series as well as acting as Santa's spy agents. [Photos of 'Middle Earth': New Zealand's Fantasy Landscape]

Here's how these little people have evolved.

The origin of elves

Ancient Norse mythology refers to the álfar, also known as huldufólk, or "hidden folk." However, it's risky to translate álfar directly to the English word "elf," said Terry Gunnell, a folklorist at the University of Iceland. Elves are thought of as little people, perhaps wearing stocking caps and cavorting with fairies, but the original conception of álfar was far less whimsical. Some ancient poems place them side by side with the Norse gods, perhaps as another word for the Vanir, a group of gods associated with fertility, or perhaps as their own godly race. It's likely, Gunnell said, that elves' inventors had no single, unified theory on elvish identity; rather, there were a variety of related folk beliefs regarding this unseen race.

"They look like us, they live like us — at least in the older materials — and probably, nowadays, if they're living anywhere, they're living between floors in flats [apartments]," Gunnell told LiveScience, referring to the notion of an invisible, parallel world inhabited by álfar — the friendly neighbors who live between the seventh and eighth floors.

Iceland was settled in the 800s by Scandinavians and Celts, brought from Ireland as slaves. Both Scandinavian and Celtic cultures had myths of fairies, elves and nature spirits, which began to meld into the concept of álfar as representatives of the landscape, Gunnell said. Iceland's eerie, volcanic setting probably played into these myths, Gunnell said, especially in the dark of winter, when the Northern Lights are the only thing illuminating the long nights.

"The land is alive, and really, the hidden people are a personification of a very living landscape that you have to show respect for, that you can't really defeat," Gunnell said. "You have to work with it." [Top 10 Beasts and Dragons: How Reality Made Myth]

Scandinavians and Celts weren't the only Europeans who used unseen, supernatural species as symbols of the wilds surrounding them. Farther south, Germans believed in dwarves and little sprites called kobolds. Scots had house spirits called brownies.

Medieval Europeans saw elves as dark and dangerous, and linked them to demons. In the Old English "Beowulf," which dates to sometime between A.D. 700 and 1000, elves get a mention as an evil race that descended from Cain, the biblical son of Adam and Eve who murdered his brother:

"Of Cain awoke all that woful breed,

as well as the giants that warred with God."

These religious references reveal the clash and melding of folk beliefs and new religion as Christianity crept into Europe. In different tales at different times, elves alternated between good and bad, Hall wrote. They could deliver babies safely through a difficult labor — or steal away a human baby and replace it with a sickly and deformed changeling. Elves, known as alp in German, could cause nightmares (Alpdrück), perhaps similar to other mythology surrounding the scary experience of sleep paralysis. Nevertheless, elves were probably still considered human-size, rather than diminutive, Hall wrote.

By William Shakespeare's day, elves lost many of their malevolent undertones. Shakespeare's "A Midsummer Night's Dream," written in the 1590s, included an elflike figure, Puck, who acted as a jokester or trickster.

From myth to Christmas

Much as the modern Thanksgiving menu dates back to the 1800s, so too do modern U.S. Christmas traditions. Elves became linked with Santa Claus in the 1823 poem "A Visit from St. Nicholas," better known today as "The Night Before Christmas." That poem refers to Santa Claus as a "jolly old elf."

With the elf-Christmas link established, other writers began to get creative with the idea. In 1857, Harper's Weekly published a poem called "The Wonders of Santa Claus," which tells how Santa "keeps a great many elves at work/ All working with all their might/ To make a million of pretty things/ Cakes, sugar-plums, and toys/ To fill the stockings, hung up you know/ By the little girls and boys."

The idea caught on. In 1922, famed artist Norman Rockwell released a painting of an exhausted Santa surrounded by tiny, industrious elves, trying to get a dollhouse finished in time for Christmas. A 1932 short movie by Disney called "Santa's Workshop" showed bearded, blue-clad elves singing, prepping Santa's sleigh, brushing reindeer teeth and helping Santa with the naughty/nice list. "Molly seems to be OK; she eats her spinach every day," an elf rhymes, before nixing another child's ambitious list because he doesn't wash behind his ears. [6 Surprising Facts About Reindeer]

The modern era has brought nonconformist elves to the forefront, first in the form of Hermey the Misfit Elf in 1964's now-classic TV special, "Rudolph the Red-Nosed Reindeer." (Hermey preferred dentistry to servitude in Santa's workshop.) And in 2003, the comedy "Elf" starred Will Ferrell as a human brought up by Santa's elves who must travel to New York City to find his biological family.

The latest in elf innovation, the Elf on the Shelf, gives elves a duty they've never had before: not just making toys, but also serving as Santa's informants. In some ways, however, the Elf on the Shelf's arguable creepiness gets back to Christmas' roots. In Iceland, Gunnell said, children don't await Santa Claus; they wait for 13 "Yule Lads," who leave gifts in their shoes. Nor do they traditionally fear a lump of coal as a consequence of bad behavior. In Icelandic lore, the horrifying ogress Grýla eats up naughty children.

Likewise, Icelanders' beliefs about elves are closer to the concepts seen in ancient tales. As of 2007, about 37 percent of Icelanders said it was "possible" that álfar still roamed the countryside, another 17 percent said it was "probable" and 8 percent were certain elves were still afoot, Gunnell said. He compared the reluctance to discount elves with other common folk beliefs around the world, such as the notion that the dead might be able to contact the living.

"It's quite nice for your children to have a sense of the landscape like this, to have a sense of magic," Gunnell said. Americans, he argued, are looking for the same magic with both their Christmas traditions and their leisure activities.

"What you have in America is a longing for elves," he said. "This is the popularity of "Game of Thrones," "Lord of the Rings" — you name it."