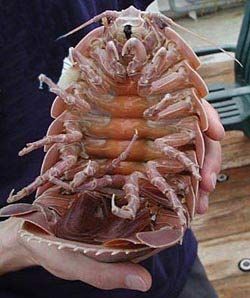 This giant deep-sea isopod is an example of an animal that has evolved to a much larger size in deeper water. These isopods are distant relatives of the tiny "pill bugs" found in many gardens. They are also related to small shallow-water isopods that live in tide pools.
(Image: © NOAA)

From tiny barnacles to giant squid, the sea is home to creatures of every weight class. Now scientists think they’ve found a connection between aquatic animals’ habitats and their size.

Researchers have long tried to identify a pattern that could explain the varying sizes of sea creatures.  Analyzing snails in particular produced a great deal of data but few leads.  Marine biologists found big snails lurking in the depths and big snails close to shore. Likewise, small snails are found in both areas.

But one enterprising scientist chose to frame the question differently.

Craig McClain, a post-doctoral fellow at the Monterey Bay Aquarium Research Institute, decided that instead of comparing all snails living in shallow regions to all snails living deeper, he would divide them according to genus, or groups of related species.  That way he and his colleagues could compare related snails to understand the impact differing environments had on size.

Finally a pattern emerged. They found that small snails living in shallow water were related to larger deepwater snails. On the other hand, large shallow-water snails had smaller deepwater relatives.

In the deep sea, the result is snails that tend to achieve a middle ground, sizewise.

The study, the first to show such a relationship, will appear in an upcoming issue of the Journal of Biogeography.

McClain attributes the relationship to competition for food. In deep water, the bigger gastropods couldn’t find enough food to support their bulky figures, and the smaller ones couldn’t range far enough to find the little they needed. So they both evolved to a similar, “compromise” size.

The theory is parallel to something called the “island rule," in which large species tend to shrink and smaller animals get bigger when isolated on an island. In extreme cases, isolated species can become exceptionally large or small.

The Komodo dragon is a good example. Growing to more than 10 feet long, it's the largest living lizard.

Another example, applying the island rule to the sea as McClain now does, is the deep-sea isopod, a relative of the small garden pill bug that can be as big as a shoe.