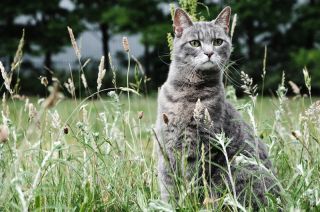 On the prowl: New research suggests that ancient Chinese villagers and cats had a mutually beneticial relationship.
(Image: © Prezoom.nl, Shutterstock)

Ancient Chinese villagers may have palled around with felines, according to a new study that finds possible evidence of domesticated cats 5,300 years ago in a Yangshao village.

The earliest evidence of cat domestication comes from ancient Egypt, where paintings show kitties getting special treatment. As the sacred animal of the goddess Bast, Egyptian cats were even honored with mummification.

Before that, the first evidence of cats and humans interacting is a 9,500-year-old burial on the island of Cyprus, where a wildcat and a person were interred side-by-side. Most of what happened between that burial and the domestication of cats in ancient Egypt remains a mystery. [Here, Kitty, Kitty: 10 Surprising Facts About Cats]

"Despite cats being so beloved as pets, it is surprising how little has been known about their domestication," said study researcher Fiona Marshall, a zooarchaeologist at Washington University in St. Louis.

Domesticated cats were thought to have landed in China only about 2,000 years ago, after the Egyptians exported them to Greece and the felines spread throughout Europe. But new research throws doubt on that theory.

The excavation of two ancient refuse pits in the remnants of a Chinese village called Quanhucun in 1997 turned up eight cat bones from at least two separate individuals. Quanhucun was part of the Yangshao culture, a well-studied Neolithic culture in China.

The Yangshao people farmed, made pottery, and lived together in long-lasting villages.

The bones found include five leg bones, two pelvic bones and one left jawbone. There are two left tibia bones, a find that establishes at least two separate cats were buried there; but because the bones were found at multiple sites, there may have been more. A new analysis of the cat bones, published this week in the journal Proceedings of the National Academy of Sciences, reveals the kitties lived about 5,300 years ago, give or take 200 years (The different cats in the sample likely lived decades or centuries apart.) This date makes the remains far older than any known human-associated cat in China.

Whether or not these cats were domesticated is a trickier question to answer. Some evidence points to yes: The bones are smaller than European wildcats and are more comparable in size to European domesticated cats, said Yaowu Hu of the Chinese Academy of Sciences, who led the study.

"However, due to the lack of the modern wildcat and domestic cats data, we cannot define them as wild or domesticated just based on the biometric data," Hu told LiveScience.

The strongest evidence in favor of domestication, Hu said, comes from the cats' diets. Researchers use molecular variants called isotopes to determine what animals used to eat — the molecules in their diets became the building blocks of their bones. An isotope analysis of both human and animal remains at the village revealed that people ate a diet heavy in the grain millet.

Rodents also ate a millet-heavy diet, the researchers found. Cats then ate the rodents, creating a food web that benefited not only the felines, but also the farmers trying to protect their food stores from pets.

"It was suspected that cat domestication worked this way," Marshall told LiveScience. "But before this study, there was never any scientific information or proof that it worked that way in the ancient past."

One cat in particular had an unusual diet profile for a meat-eater. Instead of showing high levels of a nitrogen isotope associated with a carnivorous diet, this cat ate a lot of agricultural products.

"These data are intriguing, raising the possibility that this cat was unable to hunt and scavenged for discarded human food or that it was looked after and fed by people," the researchers wrote.

The research can't, however, explain the spread of domesticated cats. It's possible, Hu said, the Chinese cats were part of the same lineage as the kitties domesticated in Egypt. Or they could have been domesticated in China independently. To solve the mystery, Marshall said, "future work on ancient DNA will be necessary."