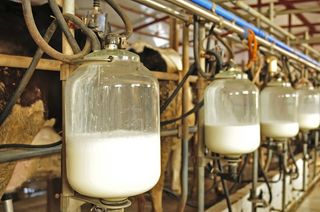 Raw milk may contain bacteria such as E. coli and Campylobacter.
(Image: © Milk photo via Shutterstock)

People should consume only pasteurized milk, the American Academy of Pediatrics said in a new policy statement, reaffirming its position on the issue.

Pregnant women who drink raw milk may face a fivefold increase in risk of the parasite infection toxoplasmosis, the doctors' group said; and infection with bacteria called Listeria, which are also found in raw milk, has been linked with high rates of stillbirths, preterm delivery, as well as sepsis and meningitis in the newborns, said the AAP researchers who reviewed studies on the risks of raw milk consumption.

Children, the elderly and people whose immune systems have been suppressed due to other diseases are also particularly at risk for becoming severely ill after consuming raw milk, the researchers said.

The AAP said it endorses a ban on the sale of raw or unpasteurized milk and its products, such as cheese, and encourages pediatricians to contact their state representatives to support such a ban, according to the statement published today (Dec. 16) in the journal Pediatrics.

Sales of raw milk are legal in 30 U.S. states, although the Food and Drug Administration banned the interstate sale of unpasteurized milk in 1987. According to estimates, 1 percent to 3 percent of all dairy products consumed in the United States are not pasteurized, which means they can carry pathogens such as Listeria, Campylobacter, Salmonella, Brucella and E. coli. [Top 7 Germs in Food that Make You Sick]

Over the past decade, consumption of raw milk has resulted in 93 illness outbreaks, 1,837 illnesses, 195 hospitalizations, and two deaths, according to the Centers for Disease Control and Prevention.

One study, published last week by researchers at the Minnesota Department of Public Health, found that as many as one person in six who drinks raw milk becomes ill.

The bacterial infections that come from raw milk often lead to diarrhea and stomach cramps. But for vulnerable people, infections can have serious, sometimes life-threatening consequences. For example, pregnant women, unborn fetuses, and newborns are 13 to 17 times more likely to develop severe illness because of listeria infection, compared with other groups of people, studies have shown.

Proponents of raw milk claim it is healthier, because it contains natural factors that are inactivated by pasteurization. However, such claims haven't been proven scientifically, the AAP said. In contrast, there is strong evidence that pasteurization does not alter the nutritional value of milk, the researchers said.