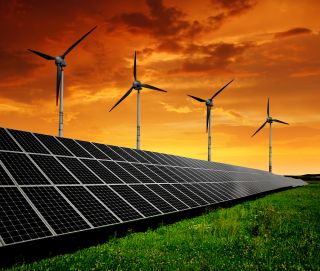 A smart grid would be well-integrated with renewable energy sources such as solar and wind energy.
(Image: © Vaclav Volrab / Shutterstock.com)

Simply put, a smart grid is an electrical grid that's integrated with computerized, two-way communication networks. In addition to sending electricity from a power plant to homes and offices, smart grids also provide feedback to system operators regarding power interruptions and electrical use.

"A smart grid is one that has real-time monitoring and reaction, which allows the system to constantly modify and tune itself to an optimal state," said Massoud Amin, professor of electrical and computer engineering at the University of Minnesota and an outspoken proponent of smart-grid development.

"It also has anticipation, which enables the system to automatically look for problem areas that could trigger larger problems and disturbances," Amin told LiveScience. "And it has rapid isolation, which allows the system to isolate parts of the network that are going through failure — or about to fail — from the rest of the system, enabling a more rapid restoration." [Top 10 Alternative Energy Bets]

Indeed, the advantages of a smart grid are almost too numerous to list, but according to SmartGrid.gov (a website developed by the Department of Energy), a smart grid will permit more efficient transmission of electricity, lower operating and kilowatt costs, quicker restoration of electricity after outages and reduced energy use during peak-demand hours.

In addition to keeping your lights on and your cellphone charged, the development of a smart grid would have substantial environmental and economic benefits, proponents say.

"Today, power generation currently accounts for 40 percent of the U.S. carbon footprint, so we as a world must find a way to do more with less, and we have to do it quickly," John McDonald, director at GE Digital Energy, said at a 2008 conference organized by the Institute of Electrical and Electronics Engineers (IEEE).

As renewable energy sources such as wind and solar slowly make up a larger portion of the U.S. energy picture, a smart grid will be better able to integrate and transmit that energy across the power grid.

"Renewable resources are not concentrated near places where there are industrial parks and cities. They happen to be located in the central part of the United States, where there's a large wind resource, or in the Southwest desert," Clark Gellings of the Electric Power Research Institute said at the IEEE conference.

"What the smart grid will do is let us collect those renewable energy resources and deliver them to cities and homes and urban areas where they're needed," Gellings said.

The dryer's drum would continue to spin, and the operator wouldn't even know that the heat had been turned off for a few seconds. Multiplied over millions of energy-using appliances, the net effect will allow grid operators to prevent power outages and use available electricity more efficiently.

Developing a nationwide smart grid wouldn't be cheap, of course: "The cost of a smarter grid would depend on how much instrumentation you actually put in, such as the communications backbone and security," Amin said. "The total price tag ranges around $340 billion to $480 billion, which over a 20-year period would be something like $20 billion per year."

But these costs have immediate rewards, Amin asserts. "Right off the bat, the benefits are $70 billion per year in reduced costs from outages, and in a year where there are lots of hurricanes, lots of ice storms and other disturbances, that benefit even goes further. In addition, it would increase system efficiency by 4.5 percent — that's another $20.4 billion a year," Amin said.

Simply put, for every dollar spent on the development of a smart grid, "the return is about $2.80 to $6 to the broader economy. And this figure is very conservative," Amin said.

These potential long-term savings are one reason so many countries worldwide have jumped on the smart-grid bandwagon. China, for example, hasinvested $7.3 billion in smart-grid technology, and is expected to spend $96 billion more by 2020, according to figures provided by Amin. South Korea, Chile, Colombia and other nations are also ramping up smart-grid investments.

The United States, meanwhile, has spent about $7.8 billion, a figure Amin refers to as "a good down payment," though much more work needs to be done, especially with an aging electrical infrastructure.

There were 149 outages that affected 50,000 or more consumers in the United States from 2000 to 2004, according to Amin's research. But from 2005 to 2009, the number of large-scale U.S. outages jumped to 349. The electrical infrastructure in America is aging rapidly, to the point that 18 years ago depreciation started exceeding the actual investment. [Power of the Future: 10 Ways to Run the 21st Century]

Furthermore, the utility industry spends notoriously little on research and development — just 0.17 percent of their net sales are reinvested in R&D, Amin said. Only the pulp and paper industry spend less on R&D than utilities.

But the entire U.S. electrical system got a shot in the arm in 2007, with the passage of the Energy Independence and Security Act (EISA). EISA established a Federal Smart Grid Task Force and authorized the Department of Energy to develop a federal funding program for smart grid investments. And in 2009, the Obama administration announced $3.9 billion in grants to integrate renewable energy development with smart grid technology.

Do the American people and the U.S. government have the drive and the vision to make the smart grid a reality in the foreseeable future? Amin is confident that it will happen, likening this effort to landing on the moon.

"If you look at a macro picture," Amin said in an email, "whenever we make this type of a big advancement, such as the moon shot or the national highway system, and when we put the American will, know-how, and passion behind any big, hairy, audacious goal, we succeed."