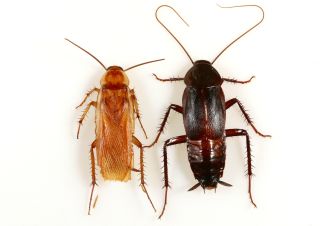 On the left is a male Turkestan cockroach, which is lighter in color than the male oriental cockroach on the right. The former also have complete wings, whereas oriental roaches only have partial wings that don't allow them to fly.
(Image: © Dr. Dong-Hwan Choe, University of California Riverside)

From the garages of Southern California to the apartments of Philadelphia, oriental cockroaches have reared their heads wherever there is moisture and rubbish or leftover food. But at least in the southwestern United States, and perhaps soon in a town near you, a new species of the cockroach is replacing them: Turkestan cockroaches.

Compared with the more familiar German, American and oriental cockroaches, the Turkestan roach is a relative newcomer to the scene, arriving to the United States in the 1970s and 1980s from somewhere in central Asia, perhaps Afghanistan, said Michael Rust, an entomologist at the University of California, Riverside. These cockroaches were first spotted near military facilities, and likely hitched rides on equipment and troops returning from these areas, Rust said. The other roach species have been around for more than a century, and American cockroaches have been in the country for more than 400 years, Rust said.

"In places where you'd see the oriental roaches in the past, you're finding these Turkestan roaches," Rust told LiveScience. [Sting, Bite & Destroy: Nature's 10 Biggest Pests]

Both species are commonly called water bugs, and look similar to each other, except for the adult males. For that reason, "in the Southwest, it [the change] has gone unnoticed for years," Rust said.

Turkestan males are lighter in color, and also have complete wings, whereas oriental roaches only have partial wings that don't allow them to fly, Rust said. Adults of both insect species measure about 1 inch (2.5 centimeters) long. The roaches are further described in a study by Rust and colleague Tina Kim and published recently in the Journal of Economic Entomology.

Rust speculated that some Turkestan roaches could be spread through their sale on the Internet, where they are bought and sold as live food for reptiles and other animals. They are ideal for such a purpose, since they breed quickly and, unlike some other roaches, cannot climb smooth surfaces, such as a glass aquarium wall, he said.

Turkestan roaches are well established in the Southwest and certain areas in the Southeast, often dwelling around houses, favoring basements, equipment boxes and other areas not in people's immediate living space. In the Northeast, however, there are places where they have been reported living in people's actual living spaces, like kitchens and bathrooms — and this will probably become more common, Rust said.

"Chances are that the Turkestan roach will do well in those situations," Rust said.