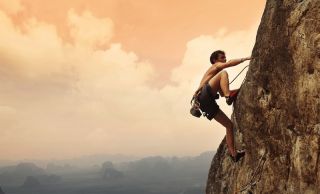 Researchers identified a small region of the central brain that may be responsible for human determination in the face of serious challenges.
(Image: © Perseverance photo via Shutterstock)

A person's willingness to push through hard times and overcome obstacles may come from a small network of neurons near the center of the brain, according to a new study.

The network is located deep inside the front of the brain, close to the meeting point of the right and left hemispheres. It lies within a region called the anterior midcingulate cortex, which is known to be broadly involved in emotion, pain and decision-making — particularly goal-oriented decisions — although the specifics of how it works remain unclear. [The 7 Biggest Mysteries of the Human Body]

Now, researchers at Stanford University have found this area of the brain seems to play an important role in what researchers call a person's "willingness to persevere," which means striving toward a goal despite serious problems. They came across this finding by accident, while delivering electrical charges to the brains of two people with epilepsy in an effort to locate the source of their seizures.

"It wasn't that we started out looking for this, it just so happened that both of these patients had a similar reaction," study co-author Vinitha Rangarajan told LiveScience.

When the researchers inserted electrode probes into the anterior midcingulate cortex of each patient, and stimulated this region of their brains, the electric charge did not produce seizures – indicating that this region was healthy in both individuals. But the charges did raise the patients' heart rates slightly and induce mild hot flashes, a reaction not caused by stimulating other parts of the brain.

When asked to describe their emotions during these electrical charges, both patients said they felt anxiety and worry, but emphasized that the emotions were not negative. Rather, they felt confident and motivated to tackle the problem at hand.

For example, one patient reported feeling as if he were in a car, heading toward a storm, and needing to figure out how to escape, according to the report published today (Dec. 5) in the journal Neuron.

Neither patient felt such emotions when stimulated with a sham (a false shock without any voltage), the researchers said.

The researchers scanned the patients' brains using functioning magnetic resonance imaging (fMRI), which reveals blood flow and activity in the brain. They found brain activity was heightened within a network that connects the anterior midcingulate cortex to other regions of the brain, suggesting that this region may be the root of such emotion.

The new findings are limited because the researchers looked at only two patients, said Amitai Shenhav, a postdoctoral researcher of psychology at Princeton University, who was not involved in the study. Although the findings are exciting, researchers cannot draw definitive conclusions from them about the function of this region of the brain, he said.

Shenhav said the emotion the patients described in the study is likely controlled by an interaction of brain regions that are connected to the anterior midcingulate cortex.

The researchers said that the findings may help determine the root of apathy or unwillingness to persevere in people with certain psychological conditions, such as dementia, and could potentially help identify forms of medical or therapeutic treatment for these conditions.

Next, the team hopes to explore the neuronal networks connected to the anterior midcingulate cortex to better pinpoint the root of the emotion they have described, Rangarajan told LiveScience.