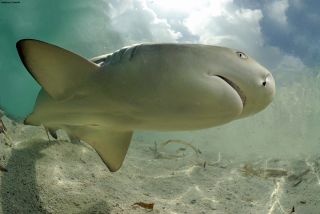 Female lemon sharks in the Bahamas seem to "remember" the place where they were born and return to the spot after years of wandering to give birth to their own young, a new study found.

This kind of homing behavior has been observed in other aquatic animals — salmon famously swim upstream to get back to their own spawning grounds and sea turtles return to the nesting beaches where they were born. After years of speculation, the researchers say this is the first time it's been confirmed that shark moms-to-be also go back to their own nurseries.

"We found that newborn sharks captured in the mid-1990s left the safety of the islands when they were between five and eight years old," biologist Kevin Feldheim, of The Field Museum in Chicago, explained in a statement. "Yet, despite leaving and visiting many other islands in their travels, these sharks 'remember' where they were born after a decade of roving, and are able to find the island again when they are pregnant and ready to give birth." [Quest for Survival: Incredible Animal Migrations]

In 1995, the researchers captured, tagged and released more than 2,000 baby sharks in the lagoon in Bimini, a set of islands located 53 miles (81 kilometers) east of Miami. Samuel Gruber, president and director of the Bimini Biological Field Station Foundation, who started the project, explained that lagoon is "almost like a lake."

"I realized that we had a chance to capture nearly every shark born into the lagoon each year, and this gave us the unique opportunity to see if the females actually come back to give birth," Gruber said in a statement. "However it took us nearly two decades and countless hours in the field and laboratory, but we finally answered this long-standing question and many others with this paper."

Sharks are slow to reach maturity, which can make it difficult to study their reproductive behaviors across generations. Their slow growth rate is one of the reasons why overfishing can seriously damage shark populations. The researchers say their work highlights the need to preserve shark nursery habitats and could help wildlife managers designate inshore marine reserves. What's more, evidence that sharks are tied to specific places gives hope that local conservation efforts — such as the Bahamas' recent legislation to protect all sharks in its waters — will be effective in curbing the shark fishing industry, the researchers say.

The findings were detailed today (Dec. 5) in the journal Molecular Ecology.