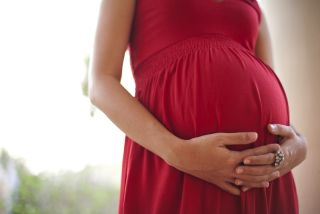 The U.S. pregnancy rate is falling, according to a new report.
(Image: © Pregnancy photo via Shutterstock)

The U.S. pregnancy rate has fallen almost continuously over the last decade, and reached a 12-year low in 2009, according to a new government report.

Researchers analyzed information on U.S. pregnancy rates for women ages 15 to 44 over the last two decades, with 2009 being the most recent year with data available.

The total number of pregnancies in 2009 was about 6.3 million, which resulted in 4.1 million live births, 1.1 million induced abortions and 1.1 million pregnancy losses, according to the report.

Women ages 25 to 29 had the highest pregnancy rate, which represents a change from earlier years: In 1990 and 2000, the pregnancy rate was highest for women ages 20 to 24. [9 Uncommon Conditions That Pregnancy May Bring]

The exception to trend of the generally declining pregnancy rate was women over 30; in this group, the pregnancy rate increased over the study period.

The age group with the biggest decline in pregnancy rate was 15- to 17-year-olds, for which the pregnancy rate dropped 53 percent, and reached a new historic low in 2009.

The new study did not look at the reasons for the decline in pregnancy rates, but some researchers have suggested that the recent economic recession, which began in 2007, could have played a role.

In addition, studies suggest that teens today are less likely to have sex, and more likely to use contraception when they first have sex, which may have contributed to the decline in teen pregnancy rates. A study published early this year also found that the U.S. teen birth rate is at a historic low.