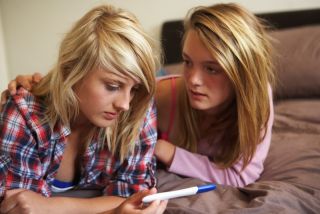 The rate of teen births in the U.S. has been falling nearly continuously for two decades.
(Image: © Teen pregnancy test photo via Shutterstock)

The U.S. teen birth rate fell again in 2012, reaching a new historic low, according to a new report from the Centers for Disease Control and Prevention.

The U.S. teen birth rate has fallen nearly continuously over the last two decades, and has been in "historic low" territory for the last few years. The 2012 teen birth rate was less than half of the 1991 rate, when a spike in births occurred.

"The fact that the teen birth rate in the U.S. has been cut in half over the past 20 years is a stunning turn-around," said Bill Albert, chief program officer at the National Campaign to Prevent Teen and Unplanned Pregnancy, a nonprofit organization in Washington, D.C. "It is really remarkable progress," Albert said.

The drop is likely due to fewer teens having sex, and more teens using contraception, Albert said. Recent research suggest sexual activity among teens is on the decline. For instance, between 2006 and 2010, 57 percent of girls ages 15 to 19 said they had never had sex, an increase from 49 percent in 1995.

However, Albert said there is still work to be done to prevent teen pregnancy. "Despite this truly extraordinary progress, U.S. rates of teen childbearing remain far higher than in other countries," Albert said. The U.S. should not be "lulled into complacency by good news," he said.

The continuous reduction in preterm birth rates is "a trend in the right direction," said Dr. Diane Ashton, deputy medical director at the March of Dimes. "It means that there will be more babies born at term, and healthier," Ashton said.

One reason for the decline in the preterm birth rate may be a reduction in the rate of elective early deliveries, she said.

The report was released today (Sept. 6) by the CDC's National Center for Health Statistics.