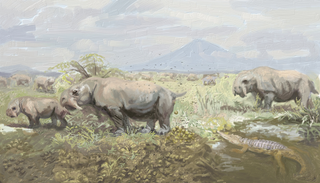 Enormous herds of rhinolike animals turned parts of what is now Argentina into minefields of dung, new fossils reveal.

These massive herbivores were dicynodonts, mammal-like reptiles that looked something like a cross between a rhinoceros and the demon dogs from "Ghostbusters." Argentine researchers have now found that these dicynodonts pooped in communal latrines, designated areas for depositing dung.

Many modern-day animals, including elephants, llamas and rhinos, poop in communal latrines. Even raccoons do it, much to the irritation of homeowners whose backyards are chosen as the places to defecate. Fossilized hyena poop from several hundred thousand years ago was deposited in communal latrines, but the behavior has not been found further back in the fossil record.

"This is the only case of megaherbavore latrine and it's the oldest," found fossilized, said study researcher Lucas Fiorelli of the Centro Regional de Investigaciones Científicas y Transferencia Tecnológica in La Rioja, Argentina.

Fiorelli and his colleagues began excavating in northwest Argentina two years ago and quickly uncovered fossilized poop — known as coprolites — by the bucket load. These coprolites date back to the middle Triassic, 240 million years ago. In this era, small dinosaurs were just beginning to appear, but the world belonged to strange mammal-like reptiles, including the famous sail-backed Dimetrodon. [Gallery: The Diversity of Dinosaur Ancestors]

In some areas, there were as many as 94 rounded fossil poops every 10 square feet (1 square meter). The coprolites varied in size from just about half an inch (1 centimeter) in diameter to more than a foot (35 cm) wide. Such variation in such a small area strongly suggested a herd of young and old animals living together, defecating communally.

In total, the researchers found eight separate latrine spots. Most of the coprolites were oval or spherical, with a few "sausagelike" outliers and a few shaped like cow patties. The only animal large enough to produce dung balls more than a foot in diameter in this region was Dinodontosaurus, a beaky, tusked bruiser that could weigh up to 6,600 pounds (3,000 kilograms). In comparison, a modern African female bush elephant weighs about 8,000 lbs. (3,600 kg).

Modern animals use communal latrines for communication — a big pile of dung can say anything from "dominant male lives here" to "fertile female nearby!" Communal defecation also prevents animals from spreading parasites, because they don't poop where they eat, Fiorelli said. It's not possible to know why Dinodontosaurus engaged in communal pooping, but the behavior could have served a similar purpose.

"It's an important social behavior," Fiorelli said. "They were gregarious animals."

The discovery is not only the first evidence of Triassic communal latrines; it's also the first direct evidence of Dinodontosaurus's diet. Most researchers agreed that this weird creature was a vegetarian, but only based on the animal's beaklike jaw. The gray-brown coprolites contained no animal bones, only woody plant material, seeds and pollen, Fiorelli and his colleagues found. The analysis reveals that Dinodontosaurus was indeed herbivorous.

Fiorelli and his colleagues have plans for more excavations in the region. They also plan to take a closer look at the Dinodontosaurus poop, which provides direct evidence of the kind of plants that were in the area 240 million years ago.

"In the formation, you have no record of plants, only animals," Fiorelli said. "Now, with the coprolite, you can know about the paleobotany of the formation."

The researchers report their findings today (Nov. 28) in the journal Scientific Reports.