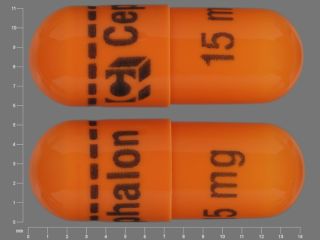 A 15-mg dose of cyclobenzaprine in capsule form.
(Image: © National Institutes of Health.)

Cyclobenzaprine hydrochloride (a prescription-only medication known as Flexeril) is a central nervous system muscle relaxant designed to relieve pain and discomfort related to muscle spasms, sprains and other muscle injuries. It is usually used in conjunction with rest, physical therapy and other measures.

Cyclobenzaprine is not designed for long-term use, and patients should follow the regimen provided by their physician, said Dr. Kiran Patel, pain management specialist at Lenox Hill Hospital. "It's a muscle relaxant that can help with a muscle spam or the sensation of tightness," Patel told Live Science.

Cyclobenzaprine is often prescribed to people who have acute back injuries, including when people report having muscle spasms or significant tightness in their back, or when the back feels like it's locked, she explained. It's also prescribed to treat for muscle strains.

Cyclobenzaprine is a skeletal muscle relaxant that works by increasing the release of the chemical norepinephrine from central nervous structures in the brain, Patel said.

According to the Food and Drug Administration (FDA), patients should avoid use of monoamine oxidase (MAO) inhibitors within 14 days of cyclobenzaprine use. These include Marplan, Nardil, Parnate and Matulane. Seizures and even death have occurred in patients who have cyclobenzaprine or other structurally similar tricyclic antidepressants with MAO inhibitor drugs.

There are some restrictions as to who can take this drug. The FDA recommends cautious use of cyclobenzaprine in patients with a history of urinary retention and glaucoma or other eye problems. There is no evidence to suggest that the drug causes any issues for pregnant mothers (according to studies done on mice, rats and rabbits), but there have yet to be any adequate and well-controlled studies in pregnant women. As a result, the FDA cautions use during pregnancy only if clearly needed. For nursing mothers, it is unknown if cyclobenzaprine is excreted in human milk. However, because it is closely related to tricyclic antidepressants, which are excreted in human milk, the FDA cautions against breastfeeding if using cyclobenzaprine.

"It's not known if this medicine can be found in breast milk, and because of that we don't want to take any chances," Patel said.

Cyclobenzaprine has not been tested in pediatric patients younger than 15 years of age. The elderly may be at a higher risk for adverse events, including hallucinations and confusion, cardiac events and drug interactions. According to the FDA, the plasma concentration of cyclobenzaprine is increased in the elderly, so the drug should be prescribed only if clearly needed. Initiation should begin with a 5 mg dose and slowly increased, under the careful eye of a doctor.

Some common side effects include drowsiness, dry mouth, dizziness, fatigue or upset stomach. If these side effects become severe or cause problems in your everyday life, the National Institutes of Health (NIH) recommends contacting your doctor.

If you experience severe skin rash, swelling of the face or tongue, difficulty breathing or swallowing, irregular heart rate, chest pain, fever or seizures, the NIH recommends contacting a doctor immediately. These side effects, which have been reported in other similar tricyclic antidepressants to the FDA, could be indications of arrhythmias, sinus tachycardia, leading to myocardial infarction and stroke.

The abrupt termination of prolonged use can also cause side effects, including nausea, headache and malaise. However, it is important to note that these withdrawal effects are not indicative of addiction.

Cyclobenzaprine may enhance the effects of other central nervous system depressants, such as alcohol, barbiturates, benzodiazepines and narcotics. According to the DEA, abusers often combine cyclobenzaprine with these depressants to produce or enhance psychoactive effects. Though it is not a controlled substance, the DEA has recorded anecdotal reports of use to induce euphoria and relaxation.

Though rare, deaths can occur from cyclobenzaprine overdose, especially in the case of multiple drug ingestion. The FDA recommends that doctors contact a poison control center for current information on treatment for an overdose, as the management of a case is complex. The most common manifestations associated with overdose are drowsiness and an abnormally rapid heart rate (tachycardia). Less common effects include body twitches (tremor), the loss of control of bodily movements (ataxia), hypertension, agitation, slurred speech, nausea, confusion, dizziness, hallucination, vomiting and coma. Rare but critical effects include cardiac arrest, chest pain and seizures.

A formulation of cyclobenzaprine is now being tested to treat combat-related post-traumatic stress disorder (PTSD). Currently, it is in its third trial of drug testing and is being studied on military personnel. Research has found, so far, that the drug can help those with PTDS sleep better and have fewer nightmares.