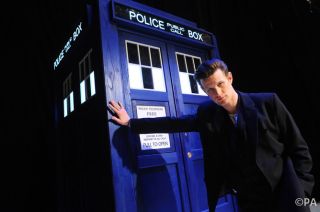 As Doctor Who's 50th anniversary looms, time travel is everywhere – on the screen, at least. Famously, the Doctor can whizz through the years using a “dimensionally transcendental” machine, the TARDIS, and make changes to the past as and when he likes. But what is time travel – and how much of "Doctor Who" might really be possible?

A handy definition of time travel comes from philosopher David Lewis. Lewis says time travel involves a journey having different durations viewed from outside (in "external time") or from inside (in "personal time"). Suppose you spend five minutes travelling aboard your machine, as measured by (e.g.) your watch and your memories. On arrival, you find 150 years have elapsed in the outside world. Congratulations, you have time-travelled. Five minutes of your personal time has covered 150 years of external time.

Odd as this sounds, Einstein's theory of Special Relativity introduced such possibilities to physics in 1905. The theory says: The duration of a process varies with the relative velocity of the observer. The closer that relative velocity gets to the speed of light, the longer the traveling process takes. [Science Fact or Fiction? The Plausibility of 10 Sci-Fi Concepts]

Suppose you want to see the Earth a billion years hence, but worry you have only about 50 personal years left. Special Relativity specifies that if you travel very close to the speed of light relative to the Earth, your 50 personal years can cover one billion Earth years.

In backward time travel, personal and external time differ in direction, so journeys end in external time before, not after, they begin; you spend five personal minutes travelling 150 years into the external past. General Relativity suggests that the universe is essentially curved spacetime, which might allow such divergences of external and personal time.

Relativity treats space and time as aspects of a single entity: "spacetime." One of the more remarkable features of General Relativity is that it allows time and space axes to be interchanged, so one observer’s space axis can be another observer’s time axis.

In 1949, Austrian mathematician Kurt Gödel used General Relativity to describe a universe where intrepid voyagers can go anywhere in (past or future) time without traveling faster than light. Gödel’s universe has no boundaries in space or time, and all the matter in it rotates. But our finite, non-rotating universe is not Gödel's. Despair not though – simply spin an ultradense, very (maybe infinitely) long cylinder very fast. Spacetime should curve around the cylinder so the direction of the local future partially points into the external past. Such devices are called "Tipler Cylinders," after physicist Frank Tipler.

Better yet, quantum theory suggests that "wormhole" connections between different spacetime points spontaneously form and break all the time. The chances are that natural wormholes are tiny - vastly smaller even than an electron, (and a billion trillion electrons can fit in a teaspoon). But you could perhaps find (or create) a wormhole big enough and durable enough to let you slip through into the past. Difficult, but theoretically possible.

No, you can't kill your physics teacher

So perhaps you could travel into the past. But what about paradoxes? What is to stop you assassinating your grandfather or yourself as infants? One answer says: logical consistency.

Classical logic says you cannot consistently kill in infancy someone who achieves adulthood. But, Lewis says, time travel need not involve doing the logically impossible – provided travelers' actions in the past are consistent with the history whence they come. So you could try killing your baby grandfather, but something would foil you – you would sneeze, or your gun would jam. Lewisian time travel is therefore (classically) consistent, but might look very strange, since seemingly possible actions (like shooting an unprotected infant) would prove impossible.

Another view says that backward time travel requires many worlds – that is, many different but equally real versions of physical reality. Physicist David Deutsch and philosopher Michael Lockwood argue that time travel must involve inter-world travel. If you travel backwards in time, you must arrive in a history different from your native one and so would be quite unfettered by your past once you get there. You could even kill this other history’s counterparts of your grandfather and yourself.

Both these concepts of backwards time travel may disappoint anyone wanting to change the “one and only” past. Conventional logic says time travellers would either help make history what it was (Lewis) or create a different history (Deutsch/Lockwood). However, quantum logic might let travellers change the actual (one-and-only) past.

Suppose we hold that quantum measurements determine (or change) quantities measured, even if those quantities lie in the past. Someone could travel back and “observe” history turning out differently from how it originally was, thereby retrospectively making actuality different from what it had been. What would happen to travellers who rebooted history is not clear, but this model seems closer to the time travel familiar from “Doctor Who” and other fictions. Beware, though, because quantum theory allows no predicting, and still less controlling, of the outcomes of changing the past. There would be no way to foresee the effect you would have on the present.

So far, however, it seems only the Doctor knows how to change the past at will.

Alasdair Richmond received funding from the Arts and Humanities Research Council, to fund one semester of a two-semester leave period that covered the academic year 2008-2009.