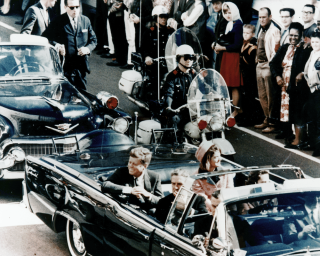 Fifty years ago, on Nov. 22, 1963, John F. Kennedy fell to an assassin's bullet in Dallas. To this day, nearly two-thirds of Americans believe that a conspiracy was responsible for the president's death.

That widespread suspicion of the official story — that lone gunman Lee Harvey Oswald killed JFK with no outside help — makes Kennedy assassination theories among the most broadly accepted conspiracy theories ever. Believing Oswald had an accomplice or accomplices is not unique to the tinfoil-hat crowd: Even Secretary of State John Kerry recently acknowledged he thinks there is more to the Kennedy death than meets the eye.

Whether or not conspiracy theorists are right about Kennedy, belief in powerful, shadowy cabals has a certain appeal to a certain kind of person. Conspiracy theories, however evil, make sense of the world and may even help protect people from their fear of death. Belief in conspiracy is the belief that if we just dig deep enough, we can find and destroy the root of all our problems, said Barna Donovan, a communication professor at St. Peter's University in New Jersey.

"It's just a little bit more comforting to think that maybe there's some kind of a hidden order, a hidden structure, that controls things," Donovan, author of the book "Conspiracy Films: A Tour of Dark Places in the American Conscious" (McFarland, 2011), told LiveScience. [Top 10 Kennedy Conspiracy Theories]

Indeed, studies suggest that conspiracies, oddly enough, are comforting. Take the conspiracy outlined by Dan Brown in the popular novel "The Da Vinci Code" (Doubleday, 2003). Brown spins a fictional-but-just-plausible tale of a major Catholic Church conspiracy to cover up the fact that Jesus and Mary Magdalene were married. A 2011 study revealed that people who were high in anxiety about death were more likely to believe this conspiracy than people who were relatively Zen about dying.

Conspiracy theories "can alleviate people's sense of loss of control by giving them a reason that things happen," study researcher Anna Newheiser, then a doctoral student in social psychology at Yale University, told LiveScience in 2011.

Certain personality types are more prone to conspiracy belief, particularly those who feel alienated or are highly paranoid, psychologists have found. Upbringing matters, too: Some people are raised to trust large institutions like the government. Others grow up hearing that those in power aren't on their side. For example, blacks are more likely than whites to believe conspiracy theories purporting the government released the HIV virus to control minorities, according to an August 2013 study in the Journal of General Internal Medicine. The black community has faced real medical conspiracies, however, including the Tuskegee syphilis study, which ran for 40 years and withheld syphilis treatment from black men who thought they were being cured. [7 Absolutely Evil Medical Experiments]

"I think that for many people there's this 'tip of the iceberg' mentality, when oftentimes you do read stories and hear stories of real instances of criminality and scandals and corruption," Donovan said. "We can imagine much worse."

Upbringing interacts with political views to determine what a conspiracy-minded person is likely to believe, said Joe Uscinski, a political scientist at the University of Miami who has researched conspiracy beliefs. A person who is highly predisposed to believe in conspiracies and who votes Republican is likely to buy into anti-Democrat conspiracy theories, like the one suggesting President Barack Obama was secretly born in Kenya.

Likewise, a conspiracy-minded Democrat will turn their powers of suspicion against Republicans. And "9/11 Truthers" would tend to think George W. Bush plotted to take down the World Trade Center in 2001 are a good example.

Anti-Obama "Birthers" and Anti-Bush "Truthers" are less fringe than they seem; about 30 percent of Americans polled believe some form of the Birther myth and 25 percent swallow the Truther tale, according to studies done in 2012 and 2013.

As these numbers illustrate, conspiracy belief is pretty similar on either side of the political spectrum, Uscinski told LiveScience. He and his colleagues examined more than 100,000 letters to the editor in the New York Times from 1897 to 2010 and another 10,000 from the Chicago Tribune and found that political losers are the loudest conspiracy theorists.

"At any given time it will look like one side of the political spectrum is more conspiratorial than the other, but what's going on is it's just following rotations in power," Uscinski said.

The party in power gets accused of conspiracy, Uscinski and his colleagues reported at the 2011 American Political Science Association annual meeting in Seattle. The party out of power throws accusations around.

What makes the Kennedy conspiracy beliefs so widespread is that the villain can be almost anyone, Uscinski said. People on the political left can blame the military-industrial complex, the CIA or conservative reactionaries. People on the political right can take their pick of communists (Cuba or Russia) or blame Kennedy's vice president, Lyndon B. Johnson. [Top 10 Ailing Presidents]

"Everybody can pick who they want to be the villain," Uscinski said.

Similar findings occurred when students were asked about the death of Osama bin Laden, Douglas and her colleagues reported in January 2012 in the journal Social Psychological and Personality Science.

The reason seems to be that people are convinced of an underlying conspiracy, the researchers found. What that conspiracy actually consists of is almost incidental.

Kennedy conspiracies aren't just stuck in the minds of believers; they've become part of the larger culture, Uscinski said. There are innumerable books, movies, TV documentaries and articles speculating about how Kennedy died.

"Everybody has had either a high-school history teacher or a college political science professor that has said something about it that lends itself to conspiracy theory. That's how we're brought up," Uscinski said. Conspiracy chatter doesn't prove that the lone gunman theory is right or wrong, he said, but it casts a permanent cloud of suspicion over the official conclusions.

"An average, very reasonable person would say, 'Hey there are probably some questions here and there very well may be a conspiracy,'" Uscinski said.

Editor's Note: This article was updated at 3:30 p.m. Eastern to correct Barna Donovan's affiliation. It is Saint Peter's University, not Saint Peter's College.