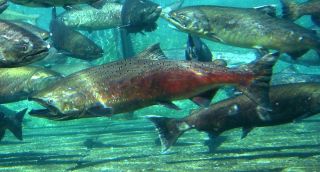 Chinook salmon hatch in freshwater and then travel to the ocean to feed later in life.
(Image: © Photo by Geoff McMichael/PNNL)

After being born in fresh water, the fledgling fish travels hundreds of miles to the ocean, often carried by currents tail-first, where it encounters deep, predator-infested waters with strong currents and competition from its fellow fish brethren. The young fish must survive the gantlet of these first few weeks if it has any hope of making it to adulthood.

A new study of salmon migration in the Pacific Northwest shows that factors such as the ocean temperature, food availability and number of predators have a profound effect on the fish as they first enter the sea. The findings, detailed recently in the journal Animal Biotelemetry, could guide policies aimed at restoring endangered salmon species in the Pacific Northwest.

"It's becoming clear that the first few weeks after salmon enter the ocean from their freshwater homes is a crucial time," study researcher Geoff McMichael, an ecologist with the Department of Energy’s Pacific Northwest National Laboratory in Richland, Wash., said in a statement. "Everything we can learn about salmon behavior during this critical time could help managers restore their stocks more effectively," McMichael added. [Quest for Survival: Incredible Animal Migrations]

McMichael and his colleagues developed a system over the past 10 years called the Juvenile Salmon Acoustic Telemetry System, which involves attaching electronic tags the size of a pencil eraser to the fish. The tags emit unique beeps that underwater receivers pick up and store.

The researchers placed receivers along the Columbia River from its mouth to the ocean. Then they captured more than 8,000 fish migrating down the Columbia, tagged them, and released them at one of four sites between 140 and 245 miles (225 to 390 kilometers) upstream from the ocean.

The team detected about 21 percent of the salmon as they entered the ocean. The sparsely spaced receivers probably missed the remainder of the fish. While many fish headed north, a substantial number went straight out into the ocean or headed south, the researchers found.

Previous studies suggested that salmon exiting the Columbia make a beeline north up the coast of Washington. By only counting salmon that headed north, these studies may have undercounted the number of fish safely reaching the ocean, the new findings suggest.

Factors such as ocean currents and temperature play a major role in the early survival of these fish, the researchers found. For example, when the ocean is warm, Pacific hake — a voracious predatory fish — swim closer to the mouth of the river and prey on the salmon.

Various salmon species entered the ocean at different times, the team found. Steelhead salmon, the biggest, strongest, fastest fish studied, head straight into the ocean, whereas young chinook salmon go back and forth between the ocean and the river for a few days. Surprisingly, steelhead were the most likely to be eaten — perhaps because they swim close to the surface, where birds such as terns and cormorants pick them off.

Fish hatcheries might take advantage of knowing which factors influence the salmon's survival so they can time the release of salmon to maximize the fish's survival odds, the researchers said.