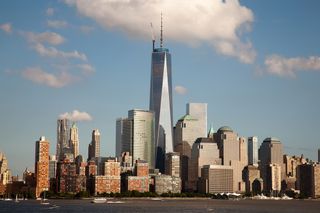 In a hotly anticipated decision, a blue-ribbon panel of experts Tuesday (Nov. 12) declared that One World Trade Center in New York City is the tallest building in the United States. The Height Committee of the Council on Tall Buildings and Urban Habitat ruled that the new structure is taller than Chicago's Willis Tower (formerly the Sears Tower).

The spat was initiated when some skyscraper fans complained that One World Trade Center does not rise to the expected height of 1,776 feet (541 meters), but cheats by using a rooftop needle to elevate its profile above the Willis Tower, which stands at 1,451 feet (442 m). The committee ruled that the needle is in fact a spire that's integral to the building, and not an add-on like an antenna.

For the height-obsessed, here is a list of some of the tallest things — natural and manmade — found throughout the world. [Infographic: Tallest Mountain to Deepest Ocean Trench]

Tallest tree: The tallest tree in the world is a California coastal redwood (Sequoia sempervirens) known as Hyperion. The behemoth was discovered towering over Sequoia National Park in 2006, and stands at 379.7 feet (115.7 m) tall. A nearby redwood named Helios is 374.3 feet (114.1 m) tall. The exact location of these and other giants is kept secret to prevent vandalism.

Tallest building: Though One World Trade Center is tall, it pales in comparison to the world's tallest building: Burj Khalifa in Dubai, United Arab Emirates, which reaches 2,716.5 feet (828 m) into the sky. The building returns the claim of Earth's tallest freestanding structure to the Middle East: The Great Pyramid of Giza in Egypt held this distinction for almost 4,000 years.

Tallest rocket: The tallest rocket ever constructed is NASA's massive Saturn V, a three-stage booster used to launch American astronauts to the moon in the late 1960s and early 1970s. The towering Saturn V launched from the Kennedy Space Center in Florida. It stood 363 feet (110 m) high and remains the most powerful rocket ever built, even though the last one flew in 1973.

Tallest mountain: The summit of Mount Everest, at 29,035 feet (8,850 m) is higher above sea level than the summit of any other mountain, so many claim it's the world's tallest mountain. However, Mauna Kea in Hawaii is the tallest when measured from base to summit: At 33,500 feet (10,210 m) high, it's nearly a mile taller than Mount Everest.

Tallest man: Sultan Kosen, at 8 feet 3 inches (2.5 m), is believed to be the world's tallest living man. He was recently given medication to stop his runaway growth, which has caused Kosen considerable health problems. American Robert Wadlow (1918-1940) holds the title of tallest man ever: Wadlow stood at 8 feet 11.1 inches (2.72 m) tall.

Tallest lightning: High above Earth's surface, extreme ultraviolet radiation from the sun reacts with air molecules to produce gigantic jets of lightning up to 56 miles (90 kilometers) tall that shoot up to the edge of space. In 2001, scientists discovered these jets of lightning arcing from clouds in the lowest portion of the atmosphere, the troposphere, up to the ionosphere.