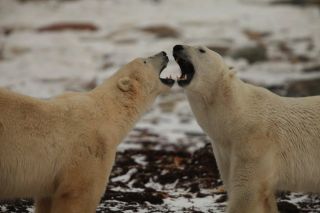 Male bears will play-fight with each other to assess each other's physical strength at a time when they aren't competing for food or prospective mates.
(Image: © Photo courtesy of explore.org and Polar Bears International.)

Every fall, thousands of polar bears gather on the southwest banks of Hudson Bay, in Canada, to wait for sea ice to form so they can hunt.

Normally, only a handful of biologists, climate scientists and tourists get to see the world's southernmost population of polar bears. But now, thanks to the philanthropic media organization Explore.org, anyone with an Internet connection can watch the animals in live, high-definition video.

Polar bears depend on sea ice in order to catch seals, their main source of food. In Hudson Bay, the ice melts completely during the summer, and re-forms in October or November. But due to climate change, the ice is forming later and melting earlier each year, threatening the existence of these iconic, majestic animals. [Gallery: Polar Bears Swimming in the Arctic Ocean]

Amstrup, who has studied polar bears in Alaska for the past 30 years, said the bears have been forced to stay on land about one day longer each year. Because of annual variation in the climate, however, scientists don't know exactly how long the Hudson Bay bears will have to wait for ice to form this year. For the next few weeks, Amstrup and his team are at Hudson Bay, observing the bears from all-terrain vehicles called Tundra Buggies.

Most of the time, the bears are just loafing around and resting. Because they're not hunting, they must conserve energy. However, some of the young male bears will play-fight with each other. The sparring behavior allows bears to assess each other's physical strength at a time when they aren't competing for food or prospective mates, Amstrup told LiveScience.

But as earlier ice melts drive the bears ashore earlier, when they've had less time to hunt and bulk up, "we will probably see less and less sparring behavior," Amstrup said. "Here in Hudson Bay, we've seen declines in the weight of the bears," he said, adding that leaner females produce fewer, smaller cubs, which don't survive as well.

Viewers might catch a glimpse of mothers with their cubs. But what they won't see are pregnant mothers, which have all moved inland to den, said wildlife biologist Tom Smith of Brigham Young University in Provo, Utah. The mother bears have their cubs in January, and emerge from their dens in March.

Though not at aggressive as grizzly bears, polar bears do kill each other from time to time. "The single most consistent threat to cubs is other bears," Smith told LiveScience. Bigger bears might kill the cubs because getting rid of them will bring a mother bear back into heat, making her fertile again, Smith said. Or they might simply kill the cubs for food.

"Cannibalism in bears is documented many times and many places," Smith said, adding, "It's definitely not the Disney version of things."

Still, the risk of a reprisal from a bear fighting back does deter them from attacking. And in general, they are fairly social animals, Smith said.

The webcams were initially developed to attract public interest in the bears. Users can also take snapshots from the video and share them using social media. Now, scientists are discussing the potential for citizen science. For instance, snapshots could be used to track the bears' weight over time, Amstrup said.

Ultimately, the webcam's most important value is "to get people's attention focused on the plight of the polar bears," Amstrup said. "They're emblematic of the future we all face, if we don't take action against climate change."