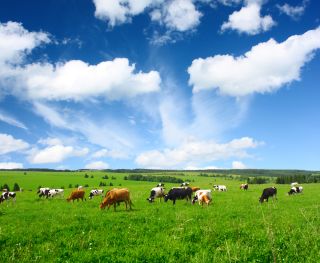 A recent report by the United Nations Food and Agriculture Organization (FAO), Tackling Climate Change Through Livestock, revealed startling news. Animal agriculture, with its 70 billion land animals, accounts for 14.5 percent of global, human-induced, greenhouse-gas emissions, confirming that the farm-animal sector is a top contributor to one of the most pressing environmental problems of our time.

Around the world, industrial factory farms now account for approximately two-thirds of egg and poultry-meat production and more than half of pig-meat production. These facilities concentrate as many as hundreds of thousands of farm animals, along with their waste, frequently in welfare-depriving cages, crates and pens.The majority of pregnant sows, egg-laying hens and other farm animals are housed in barren, crowded cages and crates barely larger than their bodies.

The animals can't exercise, fully extend their limbs, or engage in many important natural behaviors. Imagine what it would be like to be stuck in an area equivalent, for humans, to the size of an airplane seat for virtually your entire life.

And the farm sector's impact isn't likely to lessen. Globally, meat and milk demand are anticipated to grow 73 and 58 percent, respectively, between 2010 and 2050, according to the FAO report. It's important for all of us to support those farmers and ranchers who give proper care to their animals, act in accordance with the basic ethic of compassion to sentient creatures under their control, and practice and promote humane and environmentally sustainable agriculture.

Moreover, simple, even weekly, changes in diet can help. According to a study from 2008 in the United States, an average household shifting from a red meat and dairy diet to one based on vegetables — just one day per week — would reduce greenhouse-gas emissions equivalent to the people of that household driving about 1,000 fewer miles per year.

One way to do this is to join the growing Meatless Monday campaign and encourage others around the world to do the same. Even traditional farmers are increasingly voicing support for Meatless Mondays as a means to achieve more sustainable, community-based agricultural systems.

The Meatless Monday campaign was adopted by the U.S. government as a resource-saving measure during World War I. In 2003, Johns Hopkins Bloomberg School of Public Health re-launched the effort with The Monday Campaigns to promote replacing meat one day per week for human health and the health of the planet. By choosing to adopt a meat-free menu one day a week, you can help animals, the planet and your health. It's an option society can't afford not to take.