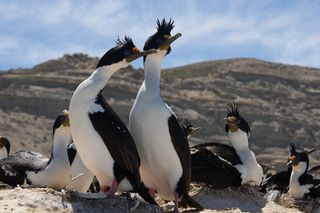 Marc Bekoff, emeritus professor at the University of Colorado, Boulder, is one of the pioneering cognitive ethologists in the United States, a Guggenheim Fellow, and co-founder with Jane Goodall of Ethologists for the Ethical Treatment of Animals. This essay is adapted from one that appeared in Bekoff's column Animal Emotions in Psychology Today. He contributed this article to LiveScience's Expert Voices: Op-Ed & Insights.

In June, during a series of lectures I presented in Germany, a number of people asked questions of the sort, "Isn't it about time we accept that animals are sentient and that we know what they want and need? Shouldn't we stop bickering about whether they are conscious, feel pain and experience emotions?"

Of course, this isn't the first time I've heard those questions, and my answer is always a resounding, Yes. Scientists do have ample, detailed, empirical facts to declare that nonhuman animals are sentient beings, and with each study, there are fewer and fewer skeptics.

Many people, like those at the lectures in Germany, are incredibly frustrated that skeptics still deny what researchers know. Advocates for animal welfare want to know what society is going to do with the knowledge we have to help other animals live in a human-dominated world.

As I was flying home, I thought of a previous essay I wrote called "Scientists Finally Conclude Nonhuman Animals Are Conscious Beings" in which I discussed the the Cambridge Declaration on Consciousness that was publicly proclaimed on July 7, 2012, at that university. The scientists behind the declaration wrote, "Convergent evidence indicates that non-human animals have the neuroanatomical, neurochemical, and neurophysiological substrates of conscious states along with the capacity to exhibit intentional behaviors. Consequently, the weight of evidence indicates that humans are not unique in possessing the neurological substrates that generate consciousness. Non-human animals, including all mammals and birds, and many other creatures, including octopuses, also possess these neurological substrates."

They could also have included fish, for whom the evidence supporting sentience and consciousness is also compelling (see also). And, I'm sure as time goes on, researchers will add many other animals to the consciousness club.

A universal declaration on animal sentience

Based on the overwhelming and universal acceptance of the Cambridge Declaration on Consciousness I offer here what I call a Universal Declaration on Animal Sentience. For the purpose of this essay I am defining "sentience" as "the ability to feel, perceive, or be conscious, or to experience subjectivity" (for wide-ranging discussion please click here.)

I don't offer any specific, geographic location for this declaration because, with very few exceptions, people worldwide — including researchers and non-researchers alike — accept that other animals are sentient beings.

One notable exception is Oxford University's Marian Dawkins who continues to claim we still don't know if other animals are conscious — using the same data as those who wrote the Cambridge Declaration on Consciousness. I call this Dawkins's Dangerous Idea.

But, the Universal Declaration on Animal Welfare is instead based on what I believe is the indisputable fact that animals are sentient and that they can suffer and feel pain, as recognized by the Treaty of Lisbon and the rapidly growing field of compassionate conservation. Evidence of animal sentience is everywhere — the remaining questions are a matter of why sentience evolved, not if it evolved.

The database of research on animal sentience is strong and rapidly growing. Scientists know that individuals from a wide variety of species experience emotions ranging from joy and happiness to deep sadness, grief, and post-traumatic stress disorder, along with empathy, jealousy and resentment. There is no reason to embellish those experiences, because science is showing how fascinating they are (for example, mice, rats, and chickens display empathy) and countless other "surprises" are rapidly emerging.

A large amount of data are available on an interactive website called the "Sentience Mosaic" launched by the World Society for the Protection of Animals (WSPA; for more details please see also), which is dedicated to animal sentience.

An essay written by Helen Proctor and her colleagues at WSPA provides a systematic review of the scientific literature on sentience. The effort used a list of 174 keywords and the team reviewed more than 2,500 articles on animal sentience. They concluded: "Evidence of animal sentience is everywhere."

Of particular interest is that Proctor and her colleagues also discovered "a greater tendency for studies to assume the existence of negative states and emotions in animals, such as pain and suffering, than positive ones like joy and pleasure." This is consistent with the historical trend of people who readily denied emotions such as joy, pleasure and happiness to animals accepting that animals could be mad or angry (see also Helen Proctor's "Animal Sentience: Where Are We and Where Are We Heading?"). There is also an upward trend in the number of articles published on animal sentience (identified using sentience-related keywords) from 1990 to 2011.

Solid evolutionary theory — namely, Charles Darwin's ideas about evolutionary continuity in which he recognized that the differences among species in anatomical, physiological and psychological traits are differences in degree rather than kind — also supports the wide-ranging acceptance of animal sentience. There are shades of gray, not black and white differences, so if people have a trait, "they" (other animals) have it too. This is called evolutionary continuity and shows that it is bad biology to rob animals of the traits they clearly possess. One telling example: humans share with other mammals and vertebrates the same areas of the brain that are important for consciousness and processing emotions.

Humans are not uniquely sentient

People surely are not exceptional or alone in the arena of sentience. We need to abandon the anthropocentric view that only big-brained animals such as ourselves, nonhuman great apes, elephants and cetaceans (dolphins and whales) have sufficient mental capacities for complex forms of sentience and consciousness.

So, the interesting and challenging question is why has sentience evolved in diverse species, not if it has evolved. It's time to stop pretending that people don't know if other animals are sentient: We do indeed know what other animals want and need, and we must accept that fact.

Nonhuman-animal minds aren't as private as some people claim them to be. Surely, we might miss out on some of the nitty-gritty details, but it is safe to say that other animals want to live in peace and safety and absent from fear, pain and suffering, just as we do.

(Nonhuman animals even worry — despite the erroneous claim that they don't, ample evidence shows they do worry about their well-being ("Do Animals Worry and Lose Sleep When They're Troubled?") and that excessive worrying and a lack of rest and sleep can be costly.)

While some people still claim that we do not know that other animals are sentient beings, countless animals continue to suffer in the most egregious ways as they are used and abused for research, education, food, clothing and entertainment. And indeed, animal sentience is assumed in many comparative studies and recent legislation — such as policies protecting chimpanzees from invasive research, based on what is known about these amazing sentient beings. [America's Fleeting Chance to Correct Chimps' Endangered Status]

Society really doesn't need any additional invasive research to move on and strongly declare that other animals are sentient, though studies continue. For example, Farm Sanctuary has put out a call for proposals for observational research on the cognitive and emotional lives of farm animals. Some researchers are indeed looking into using brain imaging to access the minds of other animals (see for example Emory University's Gregory Berns's work with dogs; Dr. Berns told me that he now has 11 dogs who are "MRI-certified").

Moving forward as a society

The time is now to shelve outdated and unsupported ideas about animal sentience and to factor sentience into all of the innumerable ways in which we encounter other animals. When the Cambridge Declaration was made public, there was a lot of pomp, champagne and media coverage. There is no need to have this fanfare for a Universal Declaration on Animal Sentience. It can be a deep, personal, and inspirational journey that comes from each of our hearts — and such a realization has a strong, and rapidly growing, evidence-based foundation.

The animals will be grateful and warmly thank us for paying attention to the science of animal sentience. When we listen to our hearts, we are recognizing how much we know about what other animals are feeling and that we owe it to them to protect them however we can. Please, let's do it now. It is easy to do and we can do no less.

This article was adapted from "A Universal Declaration on Animal Sentience: No Pretending" in Psychology Today. More of the author's essays are available in "Why Dogs Hump and Bees Get Depressed" (New World Library, 2013). The views expressed are those of the author and do not necessarily reflect the views of the publisher.This version of the article was originally published on LiveScience.