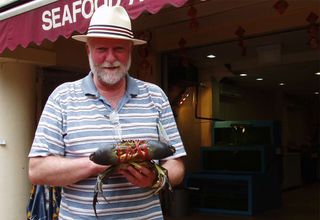 Scientists have long held that crabs are unable to feel pain because they lack the biology to do so, but behavioral evidence has recently shown otherwise. Now, new research further supports the hypothesis that crabs feel pain by showing that crabs given a mild shock will take steps to avoid getting shocked in the future.

From humans to fruit flies, numerous species come equipped with nociception, a type of reflex that helps avoid immediate tissue damage. On the other hand, pain, which results in a swift change of behavior to avoid future damage, isn't so widespread. (Research has also shown naked mole rats may be immune to pain.)

In the new study, researchers allowed shore crabs (Carcinus maenas) to choose between one of two dark shelters in a brightly lit tank. One shelter came with a mild shock. After just two trials, crabs that initially chose the shocking shelter began opting for the zapless shelter, suggesting they learned to discriminate between the two options and headed for the less painful one.

"It's almost impossible to prove an animal feels pain, but there are criteria you can look at," said lead researcher Robert Elwood, an animal behaviorist at Queen's University, Belfast, in the U.K. "Here we have another criteria satisfied — if the data are consistent, a body of evidence [showing crabs feel pain] can build up."

Elwood initially set out to see if crabs and other crustacean decapods feel pain after a chef posed him the question around eight years ago. If the invertebrates (animals without backbones) feel pain, he reasoned, their reactions to unpleasant stimuli would be more than the simple reflex of nociception — the experience would change their long-term behavior.

Elwood's first experiment showed that prawns whose antennae were doused with caustic soda vigorously groomed their antennae, as if trying to ameliorate pain. Importantly, this behavior didn't occur if Elwood treated the antennae with an anesthetic first.

Another experiment showed that hermit crabs would leave their shells if given a mild shock. "A naked crab is basically a dead crab — they were trading off avoiding the shock with getting out of the shell," Elwood told LiveScience, adding that many of the crabs moved into new shells if any were available. [The 10 Weirdest Animal Discoveries]

For his new study, Elwood tested 90 shore crabs, which naturally seek dark spaces, to see if they exhibited "avoidance learning" and would discriminate between a dangerous and a safe area. Half of the crabs were shocked upon entering the first chamber of their choice, while the other half were not. For each crab, the jolting chamber stayed the same throughout the 10 trials.

In the second trial, most of the crabs returned to their original shelter; whether they were shocked in the first trial had little effect on their second choice. However, crabs were more likely to change shelter in the third trial if they were shocked in the second trial. And as the trials wore on, crabs that chose incorrectly became more likely to exit the unpleasant chamber, brave the bright arena and hide in the alternate shelter. By the final test, the majority of the crabs chose the nonshock shelter at first go.

The research "provides evidence that supports the issue that crabs — and other crustacean decapods as well — feel pain," Francesca Gherardi, an evolutionary biologist at the University of Florence in Italy who wasn't involved in the study, told LiveScience in an email. "It is avoidance learning that makes the difference."

Animals in pain should quickly learn to avoid the unpleasant stimulus and show long-term changes in behavior, Gherardi noted. More research is needed on decapods' avoidance learning and "discrimination abilities between painful and nonpainful situations," he said.

Elwood said he thinks future research should go in a different direction. Stress often comes with pain, he said, so other experiments could look at changes in crustacean hormones or heart rates due to shock.

Whatever the case, Elwood feels it may be time to reconsider the treatment of decapods in the food industry. "If the evidence for pain in decapods continues to stack up with mammals and birds that already get some protection, then perhaps there should be some nod in that direction for these animals," he said.

The study was published today (Jan. 16) in the Journal of Experimental Biology.