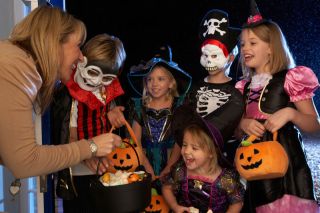 One of the biggest concerns for kids each Halloween is the decision of what costume to wear for trick-or-treating. But for many parents and police officers, the question is more serious: how to protect children from the unique threats that Halloween brings.

Amid the make-believe witches, ghouls and goblins, there are supposedly real-life villains who lay waiting all year, scheming about the evil and mayhem they will wreak on Oct. 31. These threats involve innocent children, and stories about them circulate among concerned parents, helpful neighbors, the media and local police.

But though they have storied histories, such Halloween threats are more myth than reality.

The most familiar Halloween scares involve contaminated candy, and every year, police and medical centers across the country X-ray candy collected by trick-or-treaters to check for razors, needles or contaminants that might have been placed there by strangers intending to hurt or kill children.

Yet few, if any, sinister foreign objects are ever found. This threat is essentially an urban legend. Despite email warnings, scary stories and Ann Landers columns to the contrary, there have been only two confirmed cases of children being killed by poisoned Halloween candy, and in both cases, the children were killed not in a random act by strangers, but murdered by one of their parents. The original case was that of Ronald Clark O'Bryan, who killed his son by lacing his Pixy Stix with cyanide in 1974. Halloween had nothing to do with the murder, and was used as a cover-up to make police look for a random stranger who'd given tainted candy to his son. [15 Urban Legends Debunked ]

Yet the fear continues. There have been a few instances of candy tampering over the years, and in most cases, the "victim" turned out to be the culprit — children doing it as a prank or to draw attention. X-raying Halloween treats to find harmful objects is largely pointless; it would be obvious to even the most sugar-addled child or teen if a razor blade or pins were stuck in an apple or candy bar, and in any event, it's unnecessary. If you're in doubt, throw it out! Like any other food, if you have even the slightest good reason to suspect that a piece of candy is not safe, it's easiest to simply toss it.

In their study of news stories on Halloween sadists between 1958 and 1983, researchers Joel Best and Gerald Horiuchi found the threat to have been "greatly exaggerated." They discovered the fear of razor blades in apples and poisoned candy was fueled, in part, by the media beginning in the early 1970s, according to their study, published in 1985 in the journal Social Problems. In reality, the incidence of unprovoked, random attacks on small children during Halloween is rare, and deaths are virtually nonexistent. Best and Horiuchi concluded that most reports of Halloween sadism appear to be imaginary, and that many are hoaxes by kids themselves seeking attention and sympathy. [13 Halloween Superstitions and Traditions Explained]

The media-fueled fear and panic over tainted candy has been a staple of American Halloweens for decades. However, following the Sept. 11, 2001, terrorist attacks and the resulting hypervigilance about terrorism, the candy scare took an interesting twist when rumors circulated that two suspicious Arab men had purchased $35,000 worth of candy from a New Jersey wholesale store. Emails spread across the country, warning parents that their children's candy might be tampered with by Middle Eastern terrorists.

Prompted by the public concern over terrorism, the FBI launched an investigation. A week before Halloween, on Oct. 22, 2001, officials cleared up the rumors. It was one man, not two, who had bought $15,000 worth of candy, not $35,000. The man's nationality was not revealed, so he may or may not have been Arab or dark-skinned or even had an ethnic name. The man was a wholesaler who planned to resell the candy, and the purchase was a routine, legitimate transaction that had nothing to do with terrorism.

Though the fears over poisoned candy never materialized into a real threat, the reputed Halloween evil took a new form in the 1990s: sex offenders. This scare, even more than the candy panics, was fueled by alarmist news reports and police warnings. In many states, convicted sex offenders are required not to answer the door if trick-or-treaters came by, or to report to jail overnight. Some states, such as Texas and Arkansas, required offenders to report to courthouses on Halloween evening for a mandatory counseling session. [5 Halloween Myths You Shouldn't Let Trick You]

The theory behind such laws is that Halloween provides a special opportunity for sex offenders to make contact with children, or to use costumes to conceal their identities. This has been the assumption among many local politicians and police for years. Yet there is no reason to think sex offenders pose any more of a threat to children on Halloween than at any other time. In fact, a group of children dressed in costumes at a sex offender's doorway are probably safer than at many other places they could be, including their own homes.

This is because, contrary to popular belief, most physical and sexual attacks on children occur in their own home by someone they know. Furthermore, the simple logistics of trick-or-treating make an assault very unlikely: A sex offender would have great difficultly molesting a child who is in costume, outside his or her front door and in front of other people.

A recent study confirmed the public has little to fear from sex offenders on Halloween. The research, published in the September 2009 issue of Sexual Abuse: A Journal of Research and Treatment, examined 67,307 non-family sex offenses reported to law enforcement in 30 states over nine years. The researchers wanted to determine whether or not children are, in fact, at any greater risk for sexual assault around Halloween. The answer was a conclusive no: "There does not appear to be a need for alarm concerning sexual abuse on these particular days. Halloween appears to be just another autumn day where rates of sex crimes against children are concerned."

Not only is the hype and fear unwarranted, but as the study authors concluded, taxpayer dollars spent monitoring sex offenders on Halloween are wasted. All the mandatory counseling sessions, increased police presence and so on had no effect at all on the incidence of sexual abuse on Halloween.

The real threat to children on Halloween isn't poisoned candy from evil neighbors or al Qaida or sex offenders; it's being hit by a car crossing a dark street or wearing a flammable costume too close to a fire. Most kids are very safe on Halloween and have little to fear from strangers. This is perhaps the saddest part about the Halloween scares: Children are told the scary myth that their neighbors are likely to poison, hurt, molest or kill them.

Benjamin Radford is deputy editor of "Skeptical Inquirer" science magazine and author of six books, including "The Martians Have Landed! A History of Media Panics and Hoaxes." His website is www.BenjaminRadford.com.