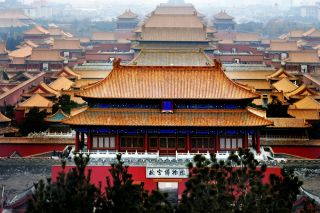 An aerial view of the Forbidden City shows many of the buildings that are part of the palace complex.
(Image: © ChameleonEye | Shutterstock)

In total, 24 emperors occupied the Forbidden City, so named because it could only be accessed by the emperor, his immediate family, his women and thousands of eunuchs (castrated male servants) and officials. It was renovated constantly throughout its 600-year history.

The complex consists of about 980 buildings, mainly in yellow and red colors, surrounded by a wall 32 feet (10 meters) high and a moat 171 feet (52 meters) wide. The city is configured on a north-south axis that aligns with the pole star, emphasizing the emperor’s position as the son of heaven. “The whole palace context is built along a central axis, the axis of the world,” said University of Sydney professor Jeffrey Riegel in a 2008 BBC/History Channel documentary, “everything in the four directions suspend from this central point represented by these palaces.”

It was difficult for an ordinary male to enter the Forbidden City, said Chen Shen, the curator of a 2014 Forbidden City exhibition at Toronto’s Royal Ontario Museum. He said that for a common man to enter he would likely have to become a eunuch, having his genitals cut off.  Even then “you still have to work your way up for many, many, many years before you get close to the emperor and his women.”

The palace complex was ordered built by Zhu Di (the Yongle Emperor) who lived A.D. 1360-1424. He was crowned emperor in 1402 after forcefully overthrowing his nephew. After his ascension, he decided to move the imperial capital from Nanjing to his power base in what was then called Beiping, renaming the city Beijing “the northern capital.”

Moving the capital and building a new palace complex was an immense operation that meant expanding China’s canal system and mobilizing about 1 million workers to cut down trees, quarry rocks, make bricks and transport supplies, among the many other necessary activities.

Vast numbers of huge stones were mined and transported there for the city's construction in the 15th and 16th centuries. The heaviest of these giant boulders, aptly named the Large Stone Carving, now weighs more than 220 tons (200 metric tons) but once weighed more than 330 tons (300 metric tons).

Jiang Li, an engineer at the University of Science and Technology Beijing, recently translated a 500-year-old document, which revealed that an especially large stone — measuring 31 feet (9.5 meters) long and weighing about 135 tons (123 metric tons) — was slid over ice to the Forbidden City on a sledge hauled by a team of men over 28 days in the winter of 1557. This finding supported previously discovered clues suggesting that sleds helped to build the imperial palace.

The emperor felt that heaven had turned against him when, in 1421, lightning strikes resulted in three of his palaces burning down. “I am frightened to the very core of my being and I don’t know what to do …” said the emperor in a document quoted by Riegel in the documentary. Despite Zhu Di’s bad fortune the Forbidden City continued to be used by China’s emperors in both good times and bad.

The Meridian Gate, which towers as high as 125 feet (38 meters), is located in the south and serves as the formal entranceway to the city. It leads visitors through a series of courtyards that end in the Hall of Supreme Harmony, the central and largest building where the emperor would conduct business.

Officials had to wait outside the Meridian Gate at about 3 a.m. to be admitted for their work, the gateway also serving public ceremonial purposes, writes Geremie Barme, a professor at the Australian National University, in his book "The Forbidden City" (Profile Books, 2008). “From the gate’s parapets, emperors presided over military ceremonies and victory parades, as well as the annual proclamation of the calendar which determined agricultural and ritual activities throughout the empire.”

The Hall of Supreme Harmony sits on a dais and stands about 115 feet (35 meters) tall, writes Marilyn Shea, a professor at the University of Maine, in a 2009 online article.  “At the top of the building, at each end of the roof ridge, are two dragons facing one another,” she writes noting that each dragon is more than 11 feet (3 meters) long and weighs close to five tons.

Barme notes that in later times, after a line of rulers from Manchuria formed the Qing Dynasty (1644-1912), another building known as the “Hall of Mental Cultivation” took over, in practice, as the main workplace of the emperor.

One of the most important events to happen in the Forbidden City occurred in 1644. In that year, a rebel army attacked Beijing, forcing the last emperor of the Ming Dynasty, Zhu Youjian (the Chongzhen emperor) to commit suicide.

A Manchu army from Manchuria was invited by the remaining Ming supporters to march on Beijing and kick the rebels out. They succeeded but the price of their success was the founding of a new, Manchu-led, dynasty known as the Qing. Their rulers would go on to rebuild Beijing, and much of the Forbidden City, after the devastation brought by the rebel forces. They incorporated Manchu customs into the daily life of the city while continuing to respect earlier Ming customs. The Qing Dynasty would be the last imperial dynasty of China, ending in 1912 with the abdication of the 5-year-old Puyi.

The Qing Dynasty reached the height of its power under Hongli (the Qianlong emperor) who reigned 1736-1795. In 1795, after ruling for 60 years, he officially retired as emperor so that the length of his rule would not surpass that of his grandfather.

In doing so, he built a retirement palace called Ningshougong (Tranquility and Longevity Palace) in the northeast part of the Forbidden City, writes Nancy Berliner in an article published in the book "The Emperor’s Private Paradise: Treasures from the Forbidden City" (Peabody Essex Museum, 2010). It included a “twenty-seven pavilion garden” spanning two acres that “would reference nature and inner harmony, with places for leisurely contemplation, poetry writing, Buddhist meditation, and delighting in the visual arts,” Berliner writes.

In practice, the Qianlong emperor was never able to fully enjoy this palace or his retirement, retaining unofficial power up until his death in 1799. His rule would represent the height of the Qing Dynasty, the 19th century being one of decline.

In the 19th century, the Dowagers, mothers of the emperors, would gain greater influence. Dowager Cixi, who lived 1835-1908, would gain great power when her 5-year-old son, the Tongzhi Emperor, ascended the throne in 1861. For a time, she ruled literally “behind the screen” along with Dowager Ci’an (who died in 1881), telling Tongzhi and his successor what to do.

This period of rule was one of decline for the Qing Dynasty, something which some authors have tried to blame on the Dowagers, Cixi in particular. A major problem the Qing had to deal with was the relative decline of their own military in comparison to that of the Western powers. Barme notes that after the failed 1900 Boxer Rebellion, a foreign army occupied Beijing, looting the Forbidden City.

The imperial throne did not last long after Cixi’s 1908 death. In 1911, an uprising forced the 5-year-old emperor Puyi and his Dowager mother to flee the Forbidden City. He formally abdicated the following year and China would never have an emperor again. The Palace Museum was founded in the Forbidden City in 1925. Today this museum has about 1.5 million artifacts from the city under its care.

Even without the emperors, there was still much history left to be made in the Forbidden City. In the Chinese civil war that broke out after World War II, the retreating Nationalists moved about 600,000 treasures, originally from the Forbidden City, to Taiwan, where they are now part of a Palace Museum in Taipei.

When the communists under Mao took control of Beijing, they didn’t know what to do with the Forbidden City. Barme notes in his book that the palace complex, with the opulence it afforded the emperor, seemed at odds with Mao’s way of thinking and plans were proposed to tear it down. They were never put into action, however, and when Richard Nixon made his groundbreaking trip to China in 1972, he visited the Forbidden City.

Today, there are still many more stories waiting to be told about the Forbidden City. The Palace Museum in Beijing has more than 1.5 million artifacts from the city, including many which have yet to be published despite a program that has produced 60 volumes in the last few decades.

Chen Shen told LiveScience in an interview that when his team was putting together the Toronto exhibition they made a week-long trip to the vaults where many treasures of the emperors and their families are being stored, including their textiles, bronzes, paintings, silver and gold utensils, documents, thrones and personalized cups among many other objects. Of the 250 artifacts his team selected for the Toronto exhibition, about 50 had never been published and 80 had never left the Forbidden City at all.

For educators and documentary makers, telling the numerous stories about the Forbidden City is also a challenge. Recently the Robert H.N. Ho Family Foundation supported a 100-episode documentary co-produced by CCTV9 and the Palace Museum that tells as much of the story as possible.

Today the importance of the Forbidden City is again undisputed. Whatever doubts Mao had about the Forbidden City had when he first entered it have been swept aside and today it is recognized as one of the greatest heritage sites in China and indeed the world. “This building still stands today as the symbol of the Chinese people and their great and glorious history,” said McGill University professor Robin Yates in the BBC/History Channel documentary.