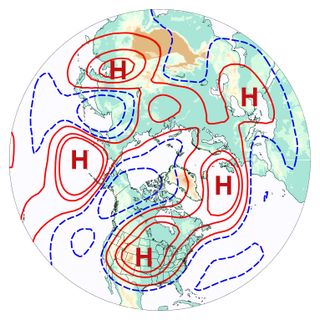 Extreme heat kills somewhere between 600 and 1,300 people each year in the United States, according to various estimates. It's well established that such deaths, often caused by heat waves, outnumber those from all other natural disasters combined. Therefore, having a better way to predict when heat waves might occur could help people beat the heat and, in turn, save lives.

Scientists may have found a new way to do just that: New research shows that heat waves are often preceded by a peculiar global weather pattern. Referred to as a wavenumber-5 pattern, it consists of five high-pressure systems evenly distributed across the Northern Hemisphere. This arrangement of the jet stream is more stable than other configurations, and allows areas of heat and high pressure to build up and persist, said Haiyan Teng, a scientist at the National Center for Atmospheric Research in Boulder, Colo. The jet stream is a river of wind high in the atmosphere that flows from west to east around the globe.

After running thousands of computer simulations of heat waves, Teng and her colleagues found that these extreme events in the United States were often preceded by this pattern, up to 15 to 20 days beforehand. In a study describing the work, published today (Oct. 27) in the journal Nature Geoscience, the scientists also found that this same configuration often took place before real-world heat waves that have occurred since 1948.

"This concept could lead to better forecasting of heat- wave events, allowing society to better prepare for these types of phenomena," said Jeff Weber, a researcher at the University Corporation for Atmospheric Research in Boulder, Colo., who wasn't involved in the study. [Weirdo Weather: 7 Rare Weather Events]

The pattern consists of an alternating string of high- and low-pressure systems spanning the globe. Heat waves happen when "domes" of warm air build up and persist in a given area, Weber said. Heat waves are expected to become more frequent and extreme in a warming world, he added.

The pattern is not caused by any specific oceanic pattern or heating of Earth's surface, but is a naturally occurring atmospheric condition, Teng said. Previous research had focused on conditions in the tropics to predict heat waves, such as El Niño and La Niña, the periodic warming and cooling of surface waters in the Pacific that have far-reaching climatic effects. But such work hasn't uncovered signals that can reliably foretell heat waves beyond 10 days in the future, as was the case in this study, Teng added.

The stability of this pattern has to do with its symmetry, but other than that, it's unclear why it favors slow-moving weather, allowing heat to build. "It's just the magic of the atmosphere — this pattern is just more stable and persistent than others," Teng said.