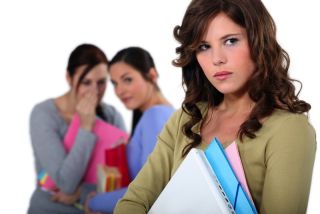 The rumor spreading, shunning and backstabbing of "mean girls" may be a relatively accurate picture of women's social interactions, one researcher says.

Though both men and women use such indirect aggression in relationships, women use backbiting to demoralize competition and take sexual rivals out of the picture, one researcher argues in a review article detailed today (Oct. 27) in the journal Philosophical Transactions of the Royal Society B.

"Women do compete, and they can compete quite fiercely with one another," said Tracy Vaillancourt, the paper's author and a psychology professor at the University of Ottawa in Canada. "The form it typically takes is indirect aggression, because it has a low cost: The person [making the attack] doesn't get injured. Oftentimes, the person's motives aren't detected, and yet it still inflicts harm against the person they're aggressing against." [The 10 Most Destructive Human Behaviors]

Anyone who has braved the halls of middle school has seen mean girl behavior firsthand. And across many different cultures, researchers have found that girls rely mostly on indirect aggression rather than physical conflict or overt aggression, which men use more frequently.

That led Vaillancourt to hypothesize that the behavior is rooted in humans' evolutionary past. But why would sneaky meanness have become so ingrained in the female repertoire?

In short, because mean girl aggression works so well.

Because of women's role in childbearing and rearing, they are less expendable than men and couldn't risk injury by settling disputes with their fists, said Anne Campbell, an evolutionary psychologist at Durham University in the United Kingdom, who was not involved in the work. Instead, social exclusion and talking behind someone's back allowed women to work out conflicts without endangering their bodies.

Backbiting and gossiping aren't unique to women, though. "There is virtually no sex difference in indirect aggression," Campbell told LiveScience. "By the time you get to adulthood, particularly in work situations, men use this, too."

But these attacks are more powerful weapons against women, who, in the evolutionary past, depended on each other to raise children; so shunning could severely hurt a woman and her children's survival odds. As a result, women may have evolved to be exquisitely attuned to such slights, Vaillancourt speculates.

Not only does such cattiness make the targeted women too sad and anxious to compete in the sexual market, some studies suggest it can make men find rivals less attractive — provided the badmouthing comes from a cute woman, Vaillancourt said.

Women often punish perceived sexual transgressions, Vaillancourt said. Studies in dozens of countries have found that women use indirect aggression against other women for being "too sexually available," Vaillancourt said.

"It's women who suppress other women's sexuality," because if sex is a resource, then more sexually promiscuous women lower the price of it, Vaillancourt told LiveScience.

One way to avoid the most destructive effects of girls' indirect aggression is to make sexual policing less powerful, Campbell said.

"We want to achieve a situation where that accusation [of promiscuity] had no power, where we don't have that double sexual standard," Campbell said. "But how we get there, I don't know."

And women don't compete over things they don't value, Vaillancourt said. So women who put less emphasis on dating, or women who are past their sexual peak, are less likely to engage in mean girl behavior (at least over men).

The review is more of an opinion piece and cites a number of other studies to support its main thesis, "none of which contain data showing that indirect aggression is successful in devaluing a competitor," Kim Wallen, a psychologist at Emory University in Atlanta who studies primate sex differences and was not involved in the study, wrote in an email. "Sadly, no empirical data are ever presented that are relevant to the central claim."