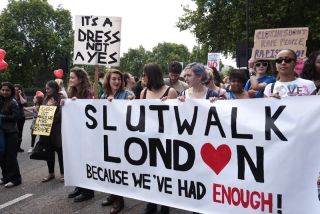 Last week, Limbaugh triggered widespread outrage by calling a Georgetown law student who spoke out for contraceptive coverage in insurance a "slut" and a "prostitute."

Limbaugh has since apologized for his "choice of words," but his critics, including Fluke, do not see that apology as sincere. Meanwhile, at least a dozen advertisers have yanked their ads from Limbaugh's show, and a Hawaii-based radio station has announced it will no longer air his show.

Limbaugh's brand of intentionally inflammatory radio rhetoric has won him decades on air and millions of listeners. He's said that Michael J. Fox, who has Parkinson's disease, exaggerated his symptoms in a 2006 commercial, and he once joked that then-13-year-old Chelsea Clinton was the "White House dog." But with his "slut" comments, Limbaugh seems to have stepped into a controversy with a long linguistic history.

The origins of the word slut are lost to time, but English poet Geoffrey Chaucer gets credit for being one of the first to put it in print, calling a sloppy male character "sluttish" in the late 1300s.

But if slut ever widely referred to men, it didn't last long. By the 1400s, the word was being used to described kitchen maids and sloppy, dirty women. The sexual connotations followed not long behind.

The Oxford English dictionary serves up a variety of cringe-inducing examples, from the 1621 work "The Anatomy of Melancholy," which refers to "a peevish drunken flurt, a waspish cholerick slut," to a character in Charles Dickens' "The Life and Adventures of Nicholas Nickleby" calling another a "slut, a hussy, an impudent artful hussy!"

The word's associations with dirt and filth continue in phrases like "slut's wool," more genially known as "dust bunnies," and "slut's-hole," a word once used to refer to garbage receptacles.

Beyond the sting of slut, Limbaugh's comments have also drawn controversy because of the message behind the words. Limbaugh's target, Fluke, was speaking on the hot-button topic of businesses run by religious institutions providing contraception coverage. [7 Surprising Facts About the Pill]

This issue came bundled with other big news about reproductive health, including a bill in Virginia mandating ultrasounds for women seeking abortions and  the failed Blunt Amendment, an attempt in the U.S. Senate to ensure that employers can opt out of covering health care, especially birth control, that goes against their religious or moral beliefs. With these efforts at the forefront, Limbaugh's remarks provided a spark for outrage.

But the word slut has also had its day in the sun. Last year, Canadian women started a protest called "SlutWalk," in response to a policeman saying that women should "avoid dressing like sluts" in order to avoid sexual assault.

"Historically, the term 'slut' has carried a predominantly negative connotation. Aimed at those who are sexually promiscuous, be it for work or pleasure, it has primarily been women who have suffered under the burden of this label," protest organizers wrote on their website, SlutWalk Toronto. "And whether dished out as a serious indictment of one's character or merely as a flippant insult, the intent behind the word is always to wound, so we're taking it back. 'Slut' is being re-appropriated."

The protests, which quickly went international, sparked a conversation about whether the word is beyond redemption. But if Limbaugh's continued hemorrhage of advertisers, even after an apology, is any indication, the word slut is far from redeemed.