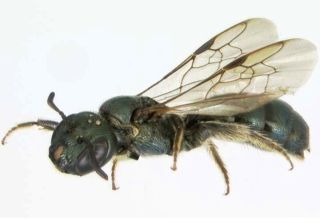 The ancestors of modern carpenter bees may have vanished from Earth roughly 65 million years ago, around the same time the dinosaurs were wiped out, a new study finds.

Researchers examined the DNA of four types of carpenter bees — belonging to the group Xylocopinae — from every continent, except Antarctica, to search for clues about their evolutionary relationships. Peering back into the lineages of the bees, the scientists noticed something unusual with all four groups, beginning roughly 65 million years ago, at the boundary between the Cretaceous and Paleogene periods.

"We can track periods of diversification and stasis," lead study author Sandra Rehan, an assistant professor of biological sciences at the University of New Hampshire,told LiveScience. "There was a period where there was no genetic diversification happening for millions of years — a real dearth of speciation. This is an indication of a mass extinction event." [The 10 Weirdest Animal Discoveries]

The end of the Cretaceous Period, corresponding to the beginning of the Paleogene Period, was already known to be a dynamic time in history. It is commonly thought that a massive asteroid or comet slammed into Earth 65 million years ago, wiping out the dinosaurs and killing up to 80 percent of all species.

"We found this mass extinction event signature in the DNA that just happened to correspond to the extinction of dinosaurs, which was a major change in the global diversity at the time," Rehan said.

Rehan and her colleagues did not study possible relationships between the bee and dinosaur extinctions, but said the similar timings act as secondary support for both theories.

"We used fossils of other lineages of bees to make inferences and calibrate time," Rehan explained. "Then, we backtracked over time."

The new research suggests the bee extinction lasted about 10 million years, she added.

The findings should generate great interest in the field, said John Ascher, assistant professor in the department of biological sciences at the National University of Singapore and a research associate in the division of invertebrate zoology at the American Museum of Natural History in New York City. But Ascher, who wasn't involved in the current research, said studies that use molecular phylogenetics tend to be "speculative in their reliance on unrealistic and insufficiently justified evolutionary models."

"I would be much more enthusiastic about the discovery of a reliable fossil within any of the extant Xylocopinae tribes (the authors note that there are none)," Ascher told LiveScience in an email.

Still, the findings could shed some light on the declines that are being observed in current bee populations, Rehan said.

"Bees have gone through hard times, and negative effects have occurred," Rehan said. "We can maybe learn from the past, and learn how pollinators and plants respond to natural disturbances. If we can understand what happened in the past, it can help us understand the current perturbations and loss of diversification."

The detailed findings of the study were published online today (Oct. 23) in the journal PLOS One.