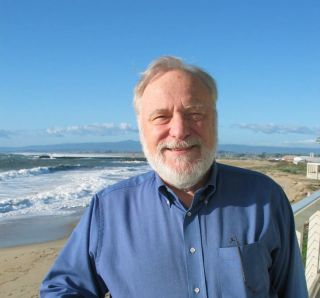 The group has been searching the Alarcón Rise — a midocean spreading center in the Gulf of California — for so-called black smokers, with their weird worms, ghostly crabs and thousands of tiny limpets, since 2003. Black smokers are deep-sea hydrothermal vents that build tall, mineral-rich chimneys. The "smoke" is actually tiny mineral particles.

A return expedition this spring to the area mapped the seafloor in greater detail, and a remote-control vehicle zoomed in on the chimneys, which are 7,900 feet (2,400 meters) below the ocean's surface. The chimneys stretch as much as 75 feet (22 m) high along the spreading center (also called a midocean ridge), where lava wells out of a rift in the ocean floor and forms new ocean crust.

Marine biologist Robert Vrijenhoek has been studying hydrothermal vent communities around the world for more than 20 years. He also discovered a new species of worm, Osedax, that feeds on the bones of dead whales.

OurAmazingPlanet spoke with Vrijenhoek by phone following the presentation of the expedition's results at the annual meeting of the American Geophysical Union in San Francisco last week. The following is an edited interview.

OurAmazingPlanet: Did you find any new species?

Robert Vrijenhoek:We're still in the process of analyzing them, but what we found is consistent with what we see at the East Pacific Rise to the south. It is the same constellation of clams and worms we would get on an open, basaltic-ridge system. There are no obviously unique species.

OAP: What lives at these vents?

R.V.: The predominant earmarks, or hallmarks of those systems, are the giant clams, calyptogena magnifica, and riftia pachyptila, the giant tube worms. Those are the iconic organisms for the eastern pacific hydrothermal vents.

The other common creatures are the limpets, the slipper shells, which look like little pointed hats, and they're small — bigger than a grape seed. They're very numerous and abundant. They live on the tubes that surround giant tube worms. [Images: Deep-Sea 'Black Smoker' Vents in Action]

OAP: MBARI tried to find these vents before, right?

R.V.: Alarcón is kind of an interesting place. We spent about five days looking for it in 2003 and we didn't find it, and that's pretty expensive. This time the mapping robot went down ahead of us and developed a very detailed, meter-scale map of the bottom, so [expedition leader] Dave Clague was able to basically land within a few hundred meters of the vent. It was remarkable. In my 25 years of doing this, I've never seen anything remotely like these capabilities of identifying things with high resolution.

OAP: What is different about working with high-definition video?

R.V.: The cameras are so good, we can blow a limpet the size of a dime up to fill up a 40-inch diagonal screen and have a pretty good chance of identifying things that way. You can't do that with the human eye when things are that small.

OAP: Why are you interested in finding new vent communities?

R.V.: In my case, I do molecular phylogenetic work. [The gene flow and evolutionary relationships of organisms.] I look at the long-term historical connections on an evolutionary time scale.

With the genetic relationships, there are [vents] that have been labeled as preserves, like in the Guaymas Basin within Mexican territorial waters. By looking at what is there, and assessing how an area is unique on an evolutionary time scale and a contemporary time scale, we can provide information that is important in making [conservation] management decisions.

From a purely scientific standpoint, an evolutionary biologist like me wants to know how everything is connected in time and space. There are very, very few fossils for these deep-sea organisms. By looking at living organisms and understanding their relationships, we can build a tree of life for them, a phylogenetic tree, and reconstruct these pathways into the past.

OAP: Why are the Guaymas Basin vents a preserve?

R.V.: There have been so many dives on those vents that the Mexican government is concerned about habitat destruction in these environments. However, these things grow back very quickly. If you knock off a chimney with a submarine, which has happened, the blasted structures grow back in a couple years. There's a classic story about the Juan de Fuca Ridge, where the International Ocean Drilling Program created a new vent when they removed their [drilling apparatus] and the animals rapidly colonized it.