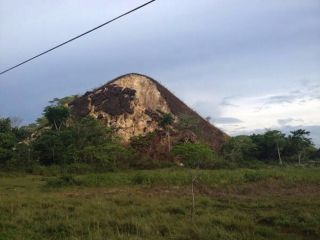 A deadly magnitude-7.1 earthquake struck the central Philippines on a national holiday yesterday.

The temblor was the strongest to shake the area in 23 years, Renato Solidum, director of the Philippine Institute of Volcanology and Seismology, told the Philippine Daily Inquirer. An estimated 43,000 people experienced severe shaking, according to the U.S. Geological Survey.

The likely culprit is the East Bohol Fault, Solidum said.

The East Bohol Fault, which crosses southern Bohol Island, helps relieve some of the tectonic pressure on the Philippines. The islands are crumpling between three crashing tectonic plates: the Philippine, Sunda and Eurasia plates.

Though the East Bohol Fault isn't along one of the colliding plate boundaries, it is a reverse fault. When the fault breaks, the earth on either side of the fracture moves closer together, one block sliding up on top of the other. This compression takes up some of the constant squeezing.

A magnitude-6 earthquakeon the fault in 1990 caused $154 million in damage and injured 300 people. It also triggered a tsunami, either from fault movement or a submarine landslide.

Yesterday's earthquake, which hit at 8:12 a.m. local time on Oct. 15, was centered about 12 miles (20 kilometers) deep. No tsunami alert resulted from the quake.

The shaking severely damaged parts of Bohol Island and Cebu Island to the north. Ports, schools and airports reported damage, and a hospital collapsed on Bohol in Loon, killing at least 18 people. Children were injured in stampedes at two sports complexes, when people panicked during the quake and rushed the exits, according to news reports. Five people were killed by a quake-triggered landslide.

Powerful aftershocks continue to hit widely across Bohol and Cebu. More than 2.6 million people live in Cebu province, and about 1.2 million people live on Bohol. Bohol Island is known for the Chocolate Hills, a proposed UNESCO World Heritage site. The sea of grass-covered knolls turns chocolate brown in the dry season. Photos posted on Twitter show that the soil covering the limestone hillocks crumbled and collapsed in some places during the earthquake.