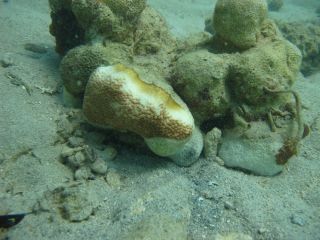 A coral with the "white plague" disease that has spread through reefs in the Caribbean Sea.
(Image: © Marilyn Brandt)

The Caribbean Sea is battling an epidemic — a nasty plague that spreads and kills quickly. Unlike the historical Black Plague, which killed millions of people in the Middle Ages, this so-called white plague is devastating populations of marine corals.

Scientists long believed the scourge, which first popped up in the 1970s, had strictly bacterial origins, but research now suggests viruses may play a prominent role in causing white plague.

During a 2010 white plague outbreak in the Virgin Islands, researchers analyzed the viruses present in diseased and healthy corals. While all of the sampled corals carried numerous viruses, the tissue taken from corals that had white plague predominately contained one, specific group of viruses. Known as small, circular, single-strand DNA viruses (SCSDV), these could potentially have caused the disease.

The results are an important step forward in understanding both white plague and coral diseases in general, said University of Pennsylvania biologist Mónica Medina, who wasn't involved in the study. "We, as a scientific community, have neglected the study of coral viruses and their role in host health for too long," she told LiveScience. [Colorful Creations: Incredible Coral]

What is white plague?

White plague is characterized by rapid tissue loss, which exposes the white skeleton of the coral. "White plague is not that difficult to tell apart from other coral diseases," said Nitzan Soffer, a microbiologist at Oregon State University and lead author of the new study. "You have living, healthy tissue, and then immediately below that you have a straight band of white on the bottom of the coral." This white band quickly expands upward to the rest of the colony.

Researchers first identified white plague in 1977 in the Florida Keys, but the disease wasn't much of an issue at the time. "It was just this new thing that people were noticing," Soffer told LiveScience. The disease reemerged in the same reefs in 1995 and quickly spread — scientists had reported white plague outbreaks throughout the Caribbean by 2001, according to the World Conservation Monitoring Centre. Recently, outbreaks of white plague have wiped out 70 to 80 percent of some Caribbean coral reefs, Soffer said.

Scientists currently recognize three types of white plague that differ in how quickly the disease progresses. Type I, the variety identified in 1977, causes coral tissue mortality at a rate of about a tenth of an inch (3 millimeters) per day. Type II, identified in 1995, progresses at up to 0.8 inches (2 centimeters) per day and can kill a small colony in one or two days. First identified in 2000, type III causes tissue loss at more than 0.8 inches a day and mainly affects the largest reef-building corals, including mountainous star coral (Montastraeafaveolata) and giant brain corals (Colpophyllia natans).

Regardless of type, the disease tends to develop in corals that have recently bleached, a process in which some stressor, typically heat, causes coral to expel the symbiotic algae that provides the coral with food. Relatedly, white plague seems to be correlated with high temperatures. "My collaborators have been seeing that this disease often comes out at the end of summer, when corals are the most heat-stressed," Soffer said. (Bleaching is an increasing concern as the world's oceans heat up due to climate change.)

Over the years, researchers have struggled to pinpoint what causes white plague. In 2003, scientists hypothesized that the bacterium Aurantimonas coralicida caused white plague type II, but recent studies suggested otherwise. "[Researchers] couldn't find the bacteria in coral with type II, or they were finding it only in healthy coral," Soffer said.

Other studies have shown that corals suffering from white plague have increased bacterial diversity and appear to harbor a higher abundance of microbes from a few select bacterial families.

Adding another layer to the mystery, other coral diseases resemble white plague. For example, white band disease produces symptoms similar to white plague, but it only affects Elkhorn coral (Acropora palmata) and staghorn coral (Acropora cervicornis). White plague is not known to infect either of these types of coral. Soffer suggests there may be more than just three types of white plague out there, particularly since very similar diseases have been found in other waters.

In 2006, scientists discovered that the bacteriumThalassomonas loyana may cause a disease similar to white plague in Red Sea corals, and more recent research showed the disease could be treated with a bacteriophage (a virus that infects bacteria), further cementing the disease's bacterial origins.

Viruses are another potential cause of white plague and other coral diseases, though few studies have tested this idea. "Viruses are challenging to work with and thus are often overlooked," explained Collin Closek, a University of Pennsylvania biologist who studies yellow blotch disease among western Caribbean corals and who wasn't involved in the study. But a viral cause of white plague makes sense because the disease spreads and kills quickly, as viruses are known to do, Soffer said.

To see if certain viruses are associated with white plague, Soffer and her colleagues investigated a September 2010 white plague outbreak — likely of type I — among colonies of boulder star corals (Montastraea annularis) in the Virgin Islands. "Originally, we were just going to sample diseased corals and healthy corals," Soffer said. "But when we got there, we realized that corals were bleaching on the top portion of the colony, while the bottom had white plague."

Next, the researchers used a combination of DNA sequencing and an imaging technique called transmission electron microscopy to determine which viruses were present in the tissue samples. While all of the colonies had numerous viruses, their viral compositions differed greatly.

Herpes-like viruses dominated the tissues of the healthy corals — the team believes the viruses establish long-term, nonlethal infections in corals, just as they do in humans and other animals. For bleached-only colonies, nucleocytoplasmic large DNA viruses — a group that includes the poxvirus — were in the slight majority, but the tissue samples also contained herpes-like viruses and SCSDVs. Diseased tissues from the colony overwhelmingly contained SCSDVs. [Tiny & Nasty: Images of Things That Make Us Sick]

Interestingly, tissues from the bleached portion of diseased corals were much more similar to the tissue of bleached-only coral than to diseased tissues, suggesting that white plague infections are localized at the disease front.

"[The research] is a great addition to the study of coral diseases, as it highlights the potential role of viruses in coral disease," said Christian Voolstra, a marine scientist at the King Abdullah University of Science and Technology in Saudi Arabia, who wasn't involved in the study. However, he notes that scientists have yet to pinpoint exactly what causes coral diseases (white plague included), and that a more comprehensive look at the issue is needed.

"For instance, if we have viral and bacterial data side by side, we could aim to understand whether bacteria-associated viruses play a pronounced role, and whether the bacteria we see increased can explain the viruses we see," Voolstra told LiveScience.

Closek added that the research and other comparative studies are essential to understanding how microbial communities change at the onset of coral diseases. "More work and experimentation will be needed to examine the causation and mitigation" of white plague and other diseases, he told LiveScience.

Soffer said that her collaborators are now running lab experiments attempting to induce white plague by infecting coral with SCSDVs — the work would provide stronger evidence regarding the role of viruses in white plague. Future studies on coral diseases need to have a stronger emphasis on viruses, she said.

"Viruses can be tracked down to a source," Soffer said. "If the viruses behind white plague are tracked down to, say, human sewage, then we may have a way to mitigate disease infections."

The research was published last month in the International Society for Microbial Ecology Journal.