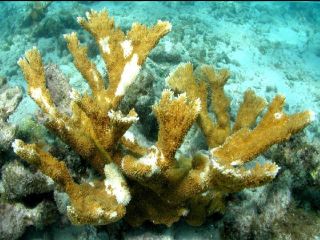 White pox disease on a frond of elkhorn coral on Carysfort Reef in the Florida Keys. The disease, caused by bacterium the can cause infections in humans, creates white blotches on coral by killing the living coral tissue and revealing the coral’s white limestone skeleton underneath.
(Image: © James W. Porter, University of Georgia)

A strange new menace has joined the long list of threats to corals, the tiny reef-building animals that create important habitat in our oceans.

A bacterium that attacks humans is also killing off a species of coral in the Caribbean, elkhorn coral, according to  researchers who proved the link by infecting fragments of the coral with bacteria from human sewage.

"This is quite an unusual discovery. It is the first time ever that a human disease has been shown to kill an invertebrate," said University of Georgiaprofessor James Porter, one of the study researchers. "This is unusual because we humans usually get disease from wildlife, and this is the other way around."

In humans, the pathogen Serratia marcescens is opportunistic, causing respiratory, wound and urinary tract infections. In coral, it causes a disease Porter and colleagues have dubbed "white pox" for the white scars that appear on infected elkhorn coral. These scars appear where the coral's living tissue has disappeared, leaving only its skeleton.

Worldwide coral faces a litany of threats. Hurricanes, which are predicted to increase in severity and number as a result of climate change, break coral to bits; warming water temperatures cause it to eject its photosynthetic algae and to bleach; ocean acidification may be impairing the animals' ability to form their skeletons; and they are plagued by poor water quality and many diseases, most of them with unknown causes.

The coral cover in the Caribbean has declined 50 percent over the past 15 years, and elkhorn coral has declined by almost 90 percent during the same time period, according to Porter.

Porter, the Meigs Professor of Ecology at the University of Georgia, compared the loss of elkhorn coral to the loss of trees in a rain forest, since these corals grow in a branched way similar to that of a tree. This three-dimensional structure provides shelter for fish and other creatures and helps absorb the power of storm surges, protecting coastal areas.

Previous work by Porter and colleague Kathryn Patterson Sutherland, of Rollins College in Florida, identified Serratia marcescens as the cause of white pox and pointed to sewage, not wildlife, as the source of the strain that infected corals. The most recent paper, published today (Aug. 17) in the journal PLoS ONE, provides conclusive evidence this strain causes white pox and indicates that other organisms may help it spread.

The experimenters collected healthy fragments of elkhorn coral from the Western Sambo Reef near Florida. In a lab, they infected the fragments with bacteria isolated from sick elkhorn coral and from wastewater.

"We've got that final piece of puzzle that shows that humans are the source," Sutherland said.

They also isolated the bacterium from a coral-eating snail and another species of coral, which they used to infect elkhorn coral, showing that these other organisms may play a role in the spread of the disease.

In 2004, Sutherland and Porter were among the scientists documenting 18 coral-threatening diseases in the Caribbean and Indo-Pacific oceans. Since then, the number of diseases known to kill coral worldwide has increased, they said. Of these, only five, including white pox, have had their cause identified.

Prospects for mitigating many of the threats, which are linked to climate change, are dim. However, in the Florida Keys a solution to improve water quality and keep the coral-killing bacteria out of the water is already in the works.

In the Keys, most wastewater is not treated but disposed of in septic systems on land. Ideally, such systems use soil to filter out contaminants, but the porous limestone bedrock of the Keys allows contaminants to leak into the ocean. Sutherland said wastewater treatment also is a problem in the Caribbean, which is south of the Keys.

Key West has installed an advanced wastewater treatment system, capable of reducing the bacterium to undetectable levels, and the other Keys are also upgrading, she said.