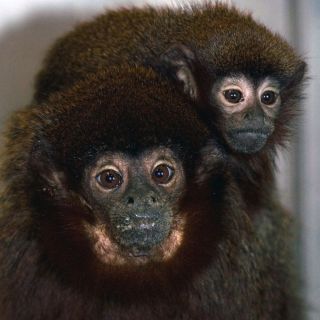 The adult male titi monkey and his infant, at the California National Primate Research Center in Davis, Calif., which might have harbored a new-to-science virus that infects and is contagious to both monkeys and humans. The virus killed a third of the monkeys at the colony, but only seemed to cause cold-like symptoms in humans.
(Image: © Kathy West)

An outbreak of a monkey-killing cold virus is the first example of an adenovirus that can infect both monkeys and humans.

"Now adenoviruses can be added to the list of pathogens that have the ability to cross species," study researcher Charles Chiu, director of the viral diagnostics center at the University of California, San Francisco, said in a statement. [10 Deadly Diseases That Hopped Across Species]

The virus outbreak occurred in 2009 at the California National Primate Research Center, at the University of California, Davis. The titi monkeys in the colony mysteriously fell ill, the sickness killing about a third of the 65 monkeys there. Only four of the 23 sick monkeys survived the illness.

At the same time, a researcher came down with a cold and fever lasting four weeks. Two members of the researcher's family, who had never encountered the monkeys, also became sick, though their illness was milder and lasted only two weeks.

The researchers tested samples from the monkeys to determine the type of virus they were infected with. The infected monkeys had high levels of an unknown adenovirus, which they named titi monkey adenovirus (TMAdV).

The researchers also found antibodies — proteins the immune system designs and uses to fight off specific infections — in two of the people possibly infected with TMAdV, evidence that the adenovirus might have been what made them ill.

The researchers suggest this could happen again with other viruses. "Our discovery of TMAdV, a novel adenovirus with the capacity to cross species barriers, highlights the need to monitor adenoviruses closely for outbreak or even pandemic potential," they write in the July 14 issue of the journal PLoS Pathogens.

The researchers can't be sure who infected whom, but the mortality rate in titis could mean the virus is native to another species. (If the monkeys were the original hosts, they likely would've already developed some immunity to the virus.)

"The virulence of TMAdV in healthy and apparently immuno-competent [with normal, healthy immune systems] titi monkeys (83 percent case fatality rate) is highly unusual for infections by adenovirus," the researchers write. "The severity of TMAdV-related illness in affected titi monkeys suggests that this species of monkey may not be the natural host for the virus."

Interestingly, none of the macaques housed in the same building showed symptoms of the virus, but their antibodies indicated that one had been infected with TMAdV at some time. This monkey could have had a low-lying infection, which spread to the titis and to humans, the researchers suggest.