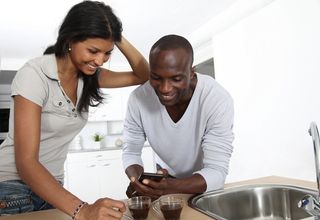 A couple uses a smartphone in the kitchen. Health-related apps, including those used to track calorie intake, are popular.
(Image: © Goodluz, Shutterstock)

A slew of smartphone apps claim to help people lose weight, but many have room for improvement and may not be very helpful to people who aren't motivated to continuously track their eating and exercise habits, a new study suggests.

On average, the apps included just three or four of the 20 strategies used in the evidence-based program.

For example, most apps let users set a weight-loss goal and a calorie goal — two strategies also used in the evidence-based program. However, only 20 percent of apps told users how many days or minutes they should exercise weekly, and none helped users to interpret nutritional labels. [10 Fitness Apps: Which Is Best for Your Personality?]

The apps generally came up short in helping to motivate people to stick to the program. For example, the evidence-based weight-loss program teaches people to identify factors that trigger them to slip from healthy eating, as well as how to incorporate exercise into their schedule, but none of the apps included these strategies.

The researchers said they don't mean to suggest that the apps aren't useful. After all, because few studies have actually tested weight-loss apps, it's unclear what an effective app should include.

"For what they do, they do really well," said study researcher Sherry Pagoto, a weight-loss expert and associate professor of medicine at the University of Massachusetts Medical School. However, many apps include a narrow range of weight-loss strategies.

"It would be interesting to see if we could expand upon the strategies they include, so that people who are at lower motivational levels could also benefit from them," Pagoto said.

Some apps include features that cannot be used in a traditional, evidence-based weight-loss program, such as the ability to connect to an online social network, or receive email reminders to track progress.

But for people who don't like to think about what they're eating, or track their exercise, even these features may not help, Pagoto told LiveScience.

Pagoto and colleagues are now working on an app (called Smartcoach) that asks users questions to gauge their level of motivation, and tries to produce solutions based on a database of advice from professionals.

The study considered only the apps themselves, and not additional material, such as DVDs or paid coaches offered by some apps. The researchers did not evaluate the apps on user-friendliness, and included only apps available in January 2012.

Ultimately, more research is needed to determine the effectiveness of weight-loss apps, and what strategies should be included for the apps to produce results.

The study is published today (Oct. 8) in the American Journal of Preventive Medicine.