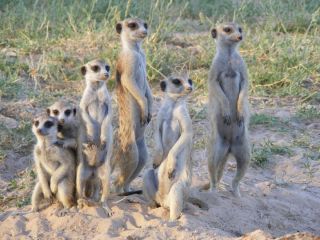 Subordinate meerkat mothers act as wet nurses in return for not being evicted from the group by the alpha female.
(Image: © Stephen Le Quesne, KMP )

Meerkats may look cute and cuddly, but for some meerkats, motherhood is a raw deal. Dominant females often kill the young of subordinate females, which then often stick around to serve as her "wet nurses," new research finds.

A variety of mammals are known to nurse another female's offspring, a phenomenon called allolactation. The practice benefits the nursed offspring and their mother, but few studies have investigated what's in it for the wet nurses.

Researchers studying meerkats (Suricata suricatta) inthe Kalahari region of South Africa found that low-ranking females are more likely to nurse the alpha female's young if they have recently lost their pups or have been banished from the group. Acting as a wet nurse may be the price these meerkat mamas pay to stay in the community. [The Weirdest Mothering Tricks in the Animal World]

"Wet-nursing by formerly evicted meerkats may be a way of 'paying rent' to be allowed back into the group without receiving further aggression," study researcher Kirsty MacLeod, a zoologist at the University of Cambridge, in England, said in a statement.

Meerkats are social animals, living in groups, or "mobs," of up to 40 individuals. A single dominant female monopolizes breeding by banishing other subordinate females or by killing their pups.

MacLeod and her colleagues observed 40 meerkat social groups over a period of 15 years, keeping track of pregnancies, lactation periods and other life-history data. Meerkats normally nurse underground, so the researchers inferred the animals were lactating based on suckle marks and the presence of sand stuck to their nipples.

Subordinate females nursed about half of all litters from alpha females, the researchers noted. Pups born later in the season were more likely to be nursed by a female that was not their mom than those born earlier.

Low-ranking females were more likely to act as wet nurses if they were pregnant at the time or recently, if they were older females, or if they had recently rejoined the group after being evicted. The wet nurses had most often lost their own litter, but meerkats have also been reported to lactate spontaneously.

In addition, meerkat wet nurses were often closely related to the dominant female, suggesting they may benefit indirectly by ensuring some of their family genes are passed on.

Meerkat wet nurses nursed for longer if they were healthy, and spent more time nursing if the litter was large or the litter's mother was in poor condition.

The findings,detailed Oct. 7 in the journal Animal Behavior, suggest that wet-nursing provides a combination of direct and indirect benefits to subordinate females.

Females that are evicted from the group normally become stressed, lose weight and have worse survival odds.

"If contributing to the maternal cares of another's offspring allowed renewed access to the social group, or to remain in the group following infanticide, there would be an incentive to 'pay-to-stay,'" MacLeod said.