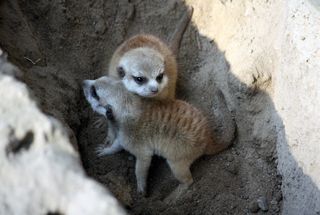 The kits are estimated to have been born out on exhibit Aug. 26, and mom has been keeping them hidden in a tunnel den, mostly out of view of staff members and the public.

"We decided it would be better for the health and welfare of the kits to not disturb them by entering the exhibit and allow them time to bond with their mother," Andi Kornak, curator of animals said in a statement. "Consequently, we are not sure exactly how many of them there may be total, but we do have visual confirmation on three individuals.”

Meerkat kits in the wild are kept hidden in the mob's tunnel system to protect them from predators. They are tended to by several members of the mob, not just the mother, who act as baby-sitters or wet nurses. A meerkat typically gives birth to between one and five kits. The kits normally begin exploring outside the den at about 3-4 weeks old.

The zoo's mob of five meerkats, a breeding male and female and their three offspring, came to Cleveland from the Red River Zoo in Fargo, North Dakota in December 2011.

Meerkats (Suricata suricatta) are native to southern Africa, including Angola, Botswana, Namibia and South Africa. In the wild they forage for insects and other small creatures including scorpions and spiders.