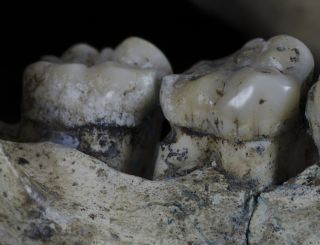 Overuse of toothpicks might be one reason that explains the mystery of why the jaws of the oldest-known extinct human relatives found outside Africa could vary so much, researchers say.

These findings suggest tool use could have helped to alter drastically how these ancient members of the human family tree ate and survived. In addition, the evidence suggests human ancestors may have overused the toothpick in some instances, possibly leading to swelling and infection.

The origin of the human family tree is rooted in Africa. The earliest known remains of hominids — humans and all their extinct relatives after they split from the ancestors of chimpanzees — that researchers have unearthed yet outside of Africa are nearly 1.8-million-year-old fossils discovered at the site of Dmanisi in the Republic of Georgia.

The remains of several hominids were previously discovered at Dmanisi, which ranged from adolescence to old age. Included within these fossils were four lower jaws, or mandibles. [In Photos: Our Closest Human Ancestor]

"Fossil findings in human evolution are often represented by mandibles, because typically they are better preserved than any other parts of the skeleton except teeth during fossilization processes," said researcher Ann Margvelashvili, a paleoanthropologist at the University of Zurich's Anthropological Institute and Museum in Switzerland.

Mysteriously, these jaws varied widely in shape from each other, more than scientists could satisfactorily explain up to now. Some researchers suggested the discrepancies might reflect ones between the sexes within a species; others proposed they represented disparities between different species.

To help solve this puzzle, scientists analyzed how jawbones from modern hunter-gatherers from Australia and Greenland could vary and compared them with Dmanisi teeth and jaws. They relied on X-rays and microscopic analysis of these samples, focusing on the wear on teeth and the resulting changes in jawbones.

Based on their data, the researchers suggest the amount of variation seen in the Dmanisi jaws reflects the differences one might normally expect within a species. Tooth wear could, in theory, greatly augment differences between individuals by reshaping features of jawbones, such as how the rows of teeth are shaped and the height and angle of the jaws.

"Researchers should always be attentive with the details when dealing with teeth, because those details often reveal many secrets of behavior, which are not visible at first to the eye," Margvelashvili told LiveScience.

In addition, scratches on the root of a tooth in one jawbone suggested repeated toothpicking caused inflammation there.

One of the four jaws was so worn that it lost all teeth except one canine tooth. The investigators suggest this hominid may have survived such toothlessness with the aid of tools to help prepare soft food.

The scientists detailed their findings online Oct. 7 in the journal Proceedings of the National Academy of Sciences.