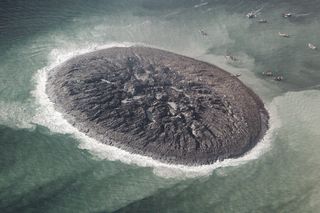 The Earth performed the ultimate magic trick last week, making an island appear out of nowhere. The new island is a remarkable side effect of the deadly Sept. 24 earthquake in Pakistan that killed more than 500 people.

A series of satellite images snapped a few days after the earthquake-triggered island emerged offshore of the town of Gwadar reveals the strange structure is round and relatively flat, with cracks and fissures like a child's dried-up mud pie.

Gwadar is about 230 miles (380 kilometers) from the earthquake's epicenter. The magnitude-7.7 earthquake was likely centered on the Chaman Fault, Shuhab Khan, a geoscientist at the University of Houston told LiveScience last week..

Geologists think the new island, named Zalzala Koh, is made of erupted mud, spewed from the seafloor when either trapped gases escaped or subsurface water was violently expelled.

The new island could be a mud volcano. Mud volcanoes form when hot water underground mixes with sediments and gases such as methane and carbon dioxide. If the noxious slurry finds a release valve, such as a crack opened by earthquake shaking, a mud volcano erupts, said James Hein, a senior scientist with the U.S. Geological Survey in Santa Cruz, Calif, said in an earlier interview. Geologists from the Pakistan Navy report that Zalzala Koh is releasing flammable gas. But seafloor sediments commonly hold methane-producing bacteria, so the possible methane coming from the island isn't a clincher to its identity.

Shaking from the powerful Sept. 24 earthquake could have also loosened the seafloor sediments offshore of Pakistan, jiggling them like jelly. The great rivers coming down from the Himalayas dump tons of water-saturated sediment into the Arabian Sea every year. The new island could be a gigantic example of a liquefaction blow, when seismic shaking makes saturated sediments act like liquid and trapped water suddenly escapes, Michael Manga, a geophysicist at the University of California, Berkeley, told LiveScience last week.

Similar islands have appeared offshore of Pakistan after strong earthquakes in the region in 2001 and 1945. If the earlier examples hold, the soft mud island won't last a year, disappearing under the erosive power of the pounding of waves from monsoon storms.