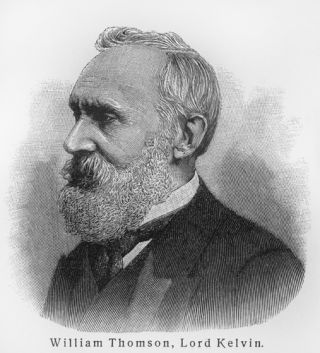 The Kelvin temperature scale was the brainchild of Belfast-born British inventor and scientist William Thomson — also known as Lord Kelvin. It is one of the three best-known scales used to measure temperature, along with Fahrenheit and Celsius.

Like other temperature scales, the freezing and boiling points of water are factors in establishing the scale’s range. There are 100 degrees between the temperate at which water freezes at (273.16 K) and boils (373.16 K).

Each unit on this scale, called a Kelvin rather than a degree, is equal to a degree on the Celsius scale. For this reason, just the K, not the degree symbol, is used when reporting temperatures in Kelvin. There are no negative numbers on the Kelvin scale, as the lowest number is 0 K.

The idea for the Kelvin scale was sparked by a discovery in the 1800s of a relationship between the volume and the temperature of a gas. Scientists theorized that the volume of a gas should become zero at a temperature of minus 273.15 C.

In 1848, Kelvin used this as a basis for an absolute temperature scale. He defined "absolute" as the temperature at which molecules would stop moving, or "infinite cold." From absolute zero, he used the same unit as Celsius to determine the increments.

Absolute zero cannot technically be achieved. However, scientists have been able to lower the temperature of matter to just a fraction of a Kelvin above absolute zero through techniques such slowing down particles using lasers.

The Kelvin scale was also influenced by the Carnot engine, a theory that examines the relationship between pressure, work and temperature. It is one of the fundamentals of physics and thermodynamics and is a measure of the efficiency of an engine.

Kelvin was a talented mathemetician, which played a role in some of his other inventions, including a device that led to the success of the telegraph cable and many nautical instruments.

His research into the nature of heat helped him form the second law of thermodynamics, which states that heat will not flow from a colder body to a hotter body. Kelvin's documentation of the law says that some of the heat from a high-temperature energy source will be downgraded to low-quality energy.

Uses of the Kelvin scale

During his research, Kelvin heated a block of carbon, progressing from a dim red light, increasing to a brighter yellow as the temperature increased and ultimately a bright blue-white glow at the highest temperatures.