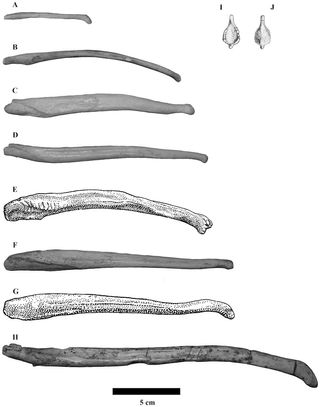 Scientists don't have any footage to shed light on the sex lives of ancient bears, but fossil penis bones can tell all.

Researchers recently studied a collection of penis bones from an extinct species of bear in Spain. Compared with today's bears, this ancient creature, named Indarctos arctoides, had a surprisingly large penis bone that suggests it had infrequent but long-lasting sex sessions, the study found. And the females may have used penis size to assess their mates.

Human males today don't have a penis bone, formally called a bacula, but it is found in many other mammals, including chimpanzees and gorillas. Whereas humans depend on blood pressure to stiffen up their sexual member, a penis bone helps animals keep their penis reliably erect for intercourse. [7 Wild Facts About the Penis]

Penis bones are rare in the fossil record, but researchers found five of them in the Madrid Basin in Spain that belonged to this large primitive bear, Indarctos arctoides. The bear roamed Europe during the Late Miocene (around 12 million to 5 million years ago), and the male of the species would have grown to around 584 pounds (265 kilograms), similar in size to the European brown bear.

Its bacula was, on average, 9.1 inches (23.3 centimeters) long — significantly larger than the penis bones of much bigger bears. Male polar bears, the biggest bears on Earth today, typically weigh 1,100 lbs. (500 kg), but their penis bone averages about 7.3 inches (18.6 cm) long, the researchers say.

The length of the penis bone could reveal details not only about the sexual behavior of Indarctos arctoides, but also the species' ecological habits and mating system.

Based on the size of baculum, the researchers think the bear likely had fewer but longer periods of intercourse than other mammals. A long baculum, the study researchers say, could have served as a physical support during mating, helping to keep the female's reproductive tract open and in an optimal position for fertilization during these sporadic dalliances.

The fossil record shows that the male Indarctos arctoides would have been much larger than the female. Previous research has suggested bear species with strong sex differences tend to have shorter penis bones and mating systems where males take multiple mates and fiercely compete for females. The fact that Indarctos arctoides had a relatively long bacula suggests it was a sexually selected trait that females used to assess mate quality.

The study was led by paleobiologist Juan Abella, of the Autonomous University of Barcelona. It was detailed Sept. 18 in the journal PLOS ONE.