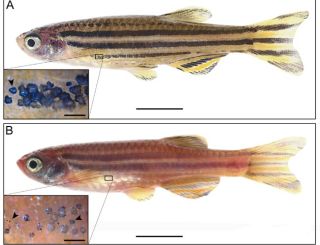 Scientists have changed mutated, golden-colored zebrafish to a standard dark-striped, yellowish-white variety by inserting the genetic information for normal pigmentation into young fish.

In an interesting twist, they also found that inserting a similar human version of the pigment gene resulted in the same color change.

As with humans, zebrafish skin color is determined by pigment cells, which contain pigment granules called melanosomes. The number, size and darkness of melanosomes per pigment cell influence the color of skin.

For example, people of European descent have fewer, smaller, and lighter melanosomes than people of West African ancestry, and Asians fall somewhere in between.

Keith Cheng of Penn State College of Medicine and his colleagues determined that a dysfunctional, mutated gene was not producing the protein needed to make melanosomes.

"They have a mutation in the gene which causes the protein machinery to say ‘stop,'" Cheng told LiveScience.

Cheng's team found that when they inserted the normal version of the gene into two-day-old embryos of the golden fish, they were able to produce melanosomes, which darkened their skin to the normal color within a few days.

Next, the researchers searched HapMap, an online database of human genetic variation, and found a similar gene for melanosome production in humans. So they inserted the human gene into golden zebrafish embryos and again changed their skin color to the darker version.

"We presume that they got darker because of similar function of the inserted gene which normally produces the more abundant, larger, and darker melanosomes," Cheng said.

It appears that like the golden zebrafish, light-skinned Europeans also have a mutation in the gene for melanosome production, resulting in less pigmented skin. Scientists suspect variations of this gene may also cause blue eyes and light hair color in some humans.

However, Cheng said, it's important to point out that the mutation in the human and zebrafish genes is different—while the zebrafish version fails completely to produce the protein to make melanosomes, the mutated human version still works, just not quite as well.

The discovery could lead to advancements in targeting a treatment for malignant melanoma—the most deadly form of skin cancer—as well as research on ways to modify skin color without damaging it by tanning or the use of harsh chemical lighteners.

This research is detailed in the Dec. 16 issue of the journal Science.