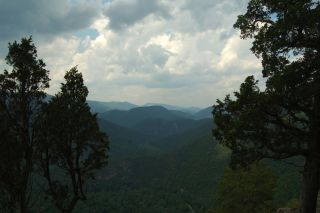 Ailsa Sachdev is an editorial intern at Sierra, the magazine of the Sierra Club. She is a rising senior at Mount Holyoke College and spent last semester reporting on witchcraft in Morocco. This piece was adapted from an article in Sierra. She contributed this article to LiveScience's Expert Voices: Op-Ed & Insights.

Tim Kovar is a master tree-climbing instructor and the founder of the Tree Climbing Planet. He has introduced more than 10,000 people to treetops while climbing trees all over the world, including in remote areas of India, Central America, and the Amazon Basin.

Recently, he described how it feels to reach the top of a tall tree, and why it won't help to call 911 if you get stuck, while answering questions about tree-climbing for Sierra magazine.

Sierra: What was the first tree you ever climbed?

One of my earliest memories as a little boy was climbing the neighbor's apple tree. I remember getting stuck up in the treetop. My friend's father had to come and help me get out of the tree. I was maybe five years old at the time. And of course, I loved it. My mother and father did not enjoy that so much. And as a five-year-old, it felt like a hundred feet up, when in reality, I was only two feet up.

Why do people climb trees?

People have different reasons for wanting to be up in the canopy. Some people come around to do tree work, some people are tree doctors, some are doing canopy research. For some people, it's just for inspiration, to get away from it all. Personally, when I climb up trees, I find peace up there. For me, it's like a meditation. It's almost like going to church.

What are some essentials for a tree-climbing expedition?

With this kind of technical tree-climbing, we stay tied in the whole time. So we're always on a rope and in a saddle. These are specially designed ropes and saddles. It's not the same gear that we use for rock-climbing. So first, you have to make sure you've got the proper gear. Another big essential is training. You have to get out there and get proper training from a proper instructor because being up in a treetop is one of the last frontiers of the planet. If you get 200 feet up in a tree and you get stuck or you drop your rope, there is really no one to call who can come and get you. You can try calling 911, but they're going to show up and they're going to have no idea how to get up into the top of a tree to rescue someone.

What do you do to prevent the tree from being damaged while tree-climbing?

We have devices called cambium savers, which protect the tree bark and branches. So as we're climbing, we're not digging the rope into the tree branch, which would be damaging the cambium layer of the tree. Also, we want to make sure to stay on the rope the whole time. When you're climbing on a rope up into the treetop, you have minimal impact on the tree. This is very important when you're climbing redwood trees, for example. But more important, it's to make sure you're not damaging the plant life that's up in the treetops, too. In the jungle, the majority of the life forms actually live up in the trees. It can take 200 years or more for plant colonies to grow on a tree branch. But just one kick with your boots and you can dislodge an entire ecosystem and send it crashing down to the ground. You have to be very, very mindful about where you place your feet in the treetops.

What can you see from treetops that you could never see from the ground, or even from high up in an airplane?

I had one example of taking a guy tree-climbing in the Amazon — a local community member, probably in his early 60s. He saw me climbing the trees and he came over and said (through a translator) that he'd like to give it a shot. He'd lived there his whole life. He got up maybe 30 feet or so and started looking around, and I saw tears well up in his eyes. I could tell he was having a good time, but something deeply emotional touched him. The translator told me as he came down that the man thought he knew the jungle; he could walk along all the trails blindfolded, no problem. But when he got up in the tree, maybe forty feet or so, and looked around the forest, he saw his home from a different perspective and he had no idea where he actually lived.

You've climbed trees with indigenous people all around the world. Have you ever encountered cultures where adults climb trees?

There are quite a few cultures where adults still climb trees. Usually, it is to gather honey, or some are helping canopy researchers. They're finding a way to make money by climbing their trees. Some others kind of laugh at me when they watch me climb with all my ropes and saddles and gear that I have. When they climb, they just grab a tree, put a little rope between their feet, and just shoot up the tree.

Climbing the Baobab trees in Madagascar. And also, while I'm in Madagascar, I want to climb with the lemurs. I'm fascinated with the primates in Madagascar and would love to get up there and join their troop for a few days.

This article originally appeared as "The Adventures of a Professional Tree-Climber" in the magazine Sierra. The views expressed are those of the author and do not necessarily reflect the views of the publisher. This version of the article was originally published on LiveScience.