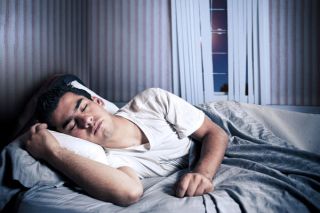 It may seem unlikely, but studies have shown controlling dreams is possible.
(Image: © Image via Shutterstock)

Even people with a rare brain disorder that leaves their minds incapable of spontaneous thought and apathetic during the day have dreams at night, new research finds.

But the study, published Sept. 11 in the journal Brain, also showed these dreams were devoid of the bizarre, emotional and complex elements so characteristic of normal dreaming.

"We were extremely surprised to observe some dreaming reported by people who have lost the faculty of thinking, of having spontaneous thoughts," said study co-author Isabelle Arnulf, a sleep disorders researcher at the Université Pierre et Marie Curie in Paris.

The findings suggest that dreaming originates from the mental processes triggered in the brain stem during the rapid eye movement (REM) stage of sleep, but that the higher-level thinking parts of the brain may add the complexity and weirdness to one's nighttime reveries. [7 Mind-Bending Facts About Dreams]

No one knows exactly why people (and animals) dream. Some scientists believe dreams represent people's secret desires, whereas others say dreams help solve problems raised during the day. Still others believe that REM sleep, when dreaming takes place, helps to consolidate memories, replenish brain chemicals or rest other parts of the brain.

It's also not clear exactly how dreams form. One brain region responsible for higher-level thinking, called the sensory cortex, might stimulate the brain stem, which, in turn, would trigger rapid eye movements; other ideas suggest the REMs themselves trigger thinking in the sensory cortex.

To find out the source of dreams, Arnulf and her colleagues studied 13 people while they were in REM sleep. All of these participants had auto-activation disorder (AAD), a brain disorder that leads people to be completely apathetic with completely blank minds during the day.

People with AAD have injuries to the part of the brain called the basal ganglia. Though most of their cognitive abilities and memories are intact, they are severely disabled by a complete lack of decision making.

"They cannot do anything but stay seated on a chair," Arnulf told LiveScience. "You have to tell them to do things; otherwise, they would never do it — even simple things, such as 'go to the toilet, have some water, eat.'"

When people with AAD are asked what they are thinking about, their answer is always "nothing."

At first, the researchers asked the AAD patients to describe their dreams in a journal, but were confronted each day with blank pages. So they decided to wake the patients up during the night to ask them about their dreams.

Four of the 13 patients experienced dreams during REM sleep, compared with 12 out of 13 people without the disorder.

The dreams of those with blank minds were mundane and about routine tasks, such as shaving or talking to family, in comparison to the emotional, bizarre dreams of the participants without AAD.

The results suggest that simple dream imagery is formed in the brain stem and is then sent to the sensory cortex, which translates the dream into a longer, more complex story and fills the dreams with their surreal, emotional tenor, Arnulf said.