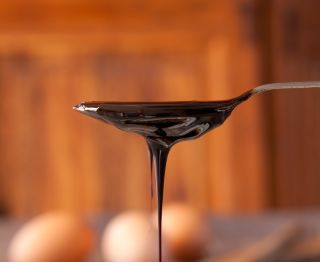 Blackstrap molasses is a dark, bittersweet syrup that is produced after the sucrose in molasses has crystallized.
(Image: © Mona Makela | Shutterstock)

Thousands of fish have been reported dead in the waters around Honolulu after a massive spill of molasses.

On Monday (Sept. 9), a pipeline from a molasses tank near Honolulu Harbor was loading the heavy, sweet liquid onto a ship when a leak in the pipeline dumped hundreds of thousands of gallons of the sticky substance into the ocean. "It's sunk to the bottom of the harbor," Jeff Hull, a spokesman for Matson Inc., the company responsible for the leak, told the Los Angeles Times. "Unlike oil, which can be cleaned from the surface, molasses sinks."

Molasses is a dark, viscous liquid that's generally made from sugarcane. Grapes, sugar beets, sorghum or other plants can also be used to make a molasses-like substance. The production of molasses is a labor-intensive process requiring several steps, including cutting the sugarcane plants, boiling, straining, skimming and reboiling. [Top 10 Bad Foods That Are Good For You]

If the molasses undergoes a third boiling step, the result is blackstrap molasses, a dark, bittersweet syrup that is produced after the sucrose in molasses has crystallized. Blackstrap has the lowest sugar content of any molasses, and is noted for containing a higher nutritional content — particularly manganese, calcium, iron, potassium, magnesium, copper and vitamin B6 — than any other refined sugar.

Molasses has a wide variety of uses: It's a common ingredient in cooking, especially in cakes, cookies and other desserts. Molasses is also used in the production of ethyl alcohol and as an additive in livestock feed.

Sweet though it may be, molasses also has a somewhat checkered past: As a key ingredient in the distillation of rum, molasses (and the cultivation of sugarcane) played a crucial part in the slave trade that brought an estimated 12 million Africans to the Americas to work as slave laborers, many in the tropics, where sugarcane is grown.

In 1919, a tank holding 2.5 million gallons of molasses in Boston's North End suddenly burst, flooding the neighborhood with an estimated 2.3 million gallons (8.7 million liters) of thick goo that raced through the streets at about 35 mph (56 km/h). The Boston Molasses Disaster claimed 21 lives, injured more than 100 people and stained Boston Harbor brown for months.

Officials in Hawaii say there's no easy way to clean up the molasses in Honolulu Harbor, and area residents are being warned to stay out of the water, because sharks and eels were coming into the harbor to feed on the dead fish.

"It's sugar in the water," Janice Okubo, a spokeswoman for the Hawaii State Department of Health, told the Times. "If you know a scientific way to remove it from the water, let us know."