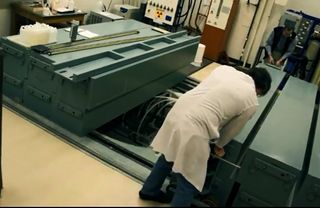 The Syrian MNSR reactor design was based on the design of a Canadian research reactor (shown).
(Image: © YouTube screengrab from Saskatchewan Research Council. )

In the event of a military strike against Syria, there's a chance that a missile could hit a Miniature Neutron Source Reactor (MNSR) outside the capital city of Damascus, Russia has warned.

"If a warhead, by design or by chance, were to hit the Miniature Neutron Source Reactor near Damascus, the consequences could be catastrophic," according to a statement from the Russian Foreign Ministry, as quoted by Reuters.

The MNSR in Syria is a Chinese-designed nuclear reactor that's modeled on a small Canadian reactor built in the early 1970s. These fission reactors were designed as research tools for neutron activation analysis (which identifies the elemental composition of materials), medical isotope production, neutron radiography (a nuclear imaging technique) and scientific training — they're not powerful enough to provide regional electrical power or other utility needs. [The Top 10 Largest Nuclear Tests]

MNSRs and most other research reactors have a nuclear core consisting of about 2 lbs. (900 grams) of highly enriched uranium; generally, the core consists of uranium-235 that's been 90 percent enriched, according to the International Atomic Energy Agency (IAEA). The core is cooled in a pool of water and is surrounded by a casing of about 4-inch-thick (10 centimeters) beryllium.

Since the first Chinese MNSR was started up in 1984, the reactor design has proven to be safe, reliable and simple to operate. In addition to two MNSRs in China, the Chinese government has facilitated the sale and construction of five additional MNSRs in Syria, Pakistan, Ghana, Iran and Nigeria.

There have been ongoing concerns, however, about the use of highly enriched uranium-235 in these reactors. Though only a small amount of U235 is needed by MNSRs, at 90 percent enrichment, it's potent enough to be referred to as "weapons-grade" uranium.

But not all research reactors have converted to low-enriched uranium, and the Syrian MNSR still uses highly enriched uranium-235. This has prompted some concern among nuclear experts: There could be "a serious local radiation hazard" if the nuclear material in the reactor were dispersed by a missile strike or some other attack, Mark Hibbs of the Carnegie Endowment told Reuters.

Former IAEA chief inspector Olli Heinonen told Reuters that the reactor has far less nuclear material than would be needed to build a nuclear bomb. "Thus, for nuclear explosive purposes, it is of a limited value," he said. Any radioactive contamination, he added, "would be a local problem."

Nonetheless, the Russian Foreign Ministry is urging the IAEA to provide its members with "an analysis of the risks linked to possible American strikes on the MNSR and other facilities in Syria."