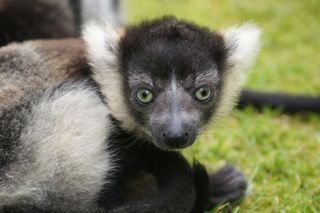 Before they learn to speak, babies perk up when they hear human voices, and the act of listening has a profound effect on their brain. But young infants may be just as sensitive to the noises of primates as the noises of their parents, new research suggests.

Infants gradually tune in to the noises of human speech. They narrow their preferences to their native tongue and eventually begin linking sounds with meaning, developing the building blocks of language.

But for babies as young as 3 months, the mere act of listening to words also engages other budding cognitive skills, such as mentally lumping objects into categories, researchers say. [11 Surprising Facts About a Baby's Brain]

The authors of the new study had previously tested whether infants who were shown a series of pictures of dinosaurs would later be able to recognize new dinosaurs. (Scientists can tell if babies identify objects as familiar or unfamiliar by tracking how their eyes move over the image in front of that object.) A group of babies in the experiment who looked at the pictures while an audio clip of human speech played were later able to recognize new dinosaurs. Babies who heard a tonal noise were not, suggesting that listening to human speech might support the core skill of forming object categories.

In the new study, the researchers found that for very young infants, this link might not be limited to human speech initially; it might be broad enough to include the vocalizations of some of our closest living cousins — non-human primates.

The researchers tried the same experiment with the dinosaur pictures, this time playing the shrieks of lemurs (primates native to the island of Madagascar) for one group of 36 babies who were simultaneously studying the images. They played backwards audio clips of human speech for another group.

"We found that for 3- and 4-month-old infants, non-human primate vocalizations promoted object categorization, mirroring exactly the effects of human speech, but that by six months, non-human primate vocalizations no longer had this effect — the link to cognition had been tuned specifically to human language," Alissa Ferry, a postdoctoral fellow at the Scuola Internationale Superiore di Studi Avanzati in Trieste, Italy, said in a statement.

Babies who heard the clips of human speech played backwards, meanwhile, did not form object categories at any age, Ferry and colleagues found.

It is not clear why an entirely unfamiliar signal (the lemur calls) had the same effect as human speech. While early experience with and exposure to human speech is key for babies' development, the results suggest the link between language and core cognitive processes does not start with learning alone, the researchers say.

"These results reveal that the link between language and object categories, evident as early as three months, derives from a broader template that initially encompasses vocalizations of human and non-human primates and is rapidly tuned specifically to human vocalizations," Sandra Waxman, co-author and professor of psychology at Northwestern University, said in a statement.

The findings raise questions that future research might answer about whether the link is broad enough to include vocalizations beyond those of our closest cousins, Waxman said. "Or is it restricted to primates," she asked, "whose vocalizations may be perceptually just close enough to our own to serve as early candidates for the platform on which human language is launched?"

The study was detailed this week in the journal Proceedings of the National Academy of Sciences.