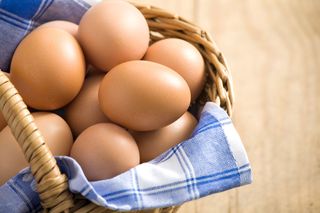 My clients regularly ask me, "Should I be eating eggs? My doctor tells me they're 'poison,' and to avoid eggs because they'll increase my cholesterol."

Most of the studies I've seen conclude that eggs are fine — and may even improve your health, as they contain nutrients difficult to find in other foods. More importantly, a report by Ying Rong of Huazhong University of Science and Technology and her colleagues published in the British Journal of Medicine in January, reviewed 17 different egg studies.

The bottom line: Your nutritional needs and food choices should be personalized. You should enjoy food and eating, as it is one of the basic pleasures in life!

My grandmother's favorite food in the whole wide world was eggs (see recipe below). She loved eggs so much, we named an egg cooking style after her. The "grandmommy egg" was soft-boiled for three minutes. As it sat in an egg cup, we would slice off the top third so the runny yolk would form a delicious and naturally creamy sauce for the white.

Unfortunately, during the last decades of her life, my grandmother came to see eggs as poison and avoided one of her real food pleasures. Health authorities were warning the public against eating eggs for fear that they were a major cause of high cholesterol levels — the bad kind, low-density lipoprotein, known as LDL — and increased risk of heart disease.

New studies show that the caution may have been an exaggeration.

Most epidemiological research — the kind of research that studies large populations over time and analyzes their diets and their health — has found no connection between eating eggs and increases in heart disease. On the other hand, controlled clinical studies — where researchers feed subjects specific amounts of cholesterol and measure the effect on blood — do show a slight increase in blood cholesterol with increases in dietary cholesterol, though how much depends on genetic factors.

Cholesterol is an important component of all human and animal cells and influences hormone biology, among other functions. Since your body naturally has all it needs from producing its own cholesterol, there is no dietary requirement for more cholesterol. But the American diet contains plenty, since we eat a lot of animal products. All animal products contain some cholesterol, but they also contain saturated fat, an even more significant culprit in heart-disease risk.

And while eggs are high in cholesterol (186 milligrams, 184 of them in the yolk), they're relatively low in saturated fat (1.6 grams in the yolk).

"In most people, for every 100 milligrams reduction in dietary cholesterol, one would predict a reduction in LDL levels of 2.2 points on average,"said Wanda Howell, professor of nutritional sciences at the University of Arizona.

In fact, during my 20 years of counseling people with high cholesterol, just reducing their saturated fat intake to a range of 4 percent to 7 percent of their calories, causes their blood cholesterol levels to plummet — a double benefit.

Interestingly, people in Japan — consumers of some of the largest quantities of eggs in the world (averaging 328 eggs consumed per person per year — have low levels of cholesterol and heart disease compared with other developed countries, especially the United States. Why? In part, it's because the Japanese eat a diet low in saturated fat.

Americans do just the opposite. Research has shown that we usually have our eggs alongside foods high in saturated fat, such as bacon, sausage and buttered toast. This meal pattern raises LDL levels and makes the effect of eating eggs worse than it actually is.

So how many eggs can you eat? That depends on a number of factors. The American Heart Association no longer includes limits on the number of egg yolks you can eat, but it recommends that you limit your cholesterol intake to 300 milligrams daily, or 200 milligrams if you have heart disease or if your LDL is greater than 100. You decide where that cholesterol comes from!

Other experts go further and say an egg a day is fine.

"The amount that one egg a day raises cholesterol in the blood is extremely small, so small in fact that the increase in risk in heart disease related to this change in serum cholesterol could never be detected in any kind of study," said Walter Willett, professor of epidemiology and nutrition at Harvard's School of Public Health."Elevations in LDL of this small magnitude could easily be countered by other healthy aspects of eggs."

Based on the research, my recommendation is if you eat a healthful diet, go ahead and eat an egg a day. (My interview on CNN summarizes the key reasons why.) On the other hand, if your cholesterol is high and if you eat the typical American diet — high in saturated fat, devoid of fruits, vegetables and fiber — maybe you shouldn't be eating an egg a day.

But will taking eggs out of an unhealthy diet make a positive difference? Probably not. I can't tell you how many times during my career I've heard people say, "I've cut out eggs, but my cholesterol is still high!" The impact of a healthy, balanced diet cannot be denied here.

Assuming you're eating a healthy diet, here are some ways you may benefit by eating eggs.

Protein. Eggs are considered the gold standard that other proteins are measured against. Because of the superior amino acid mix, an egg's six grams of protein are absorbed easily and efficiently used by the body. The egg is also low-calorie (74 calories).

Choline. Yolks are one of the best sources of this essential nutrient. Choline is needed for brain development in a growing fetus and may also be important for brain function in adults.

Lutein and Zeaxanthin. These two, important, beneficial phytochemicals found in egg yolks (as well as kale and spinach) help prevent eye diseases, especially cataracts and age-related macular degeneration. While eggs contain less lutein and zeaxanthin than greens, these phytochemicals are more absorbable because of the presence of fat in the yolk.

To bring this all together, here is a recipe that is a regular meal for me any time of the day — quick, easy, delicious, nutritious!

Servings: 1 Sauté 1/4 sweet onion and a smashed garlic clove over medium-high heat in 1 teaspoon canola or olive oil until almost soft. Add a handful of chopped tomatoes to the pan (or any other vegetables you happen to have, such as chopped spinach, kale, mushrooms or peppers) and cook for another 5 minutes. Turn down the heat to very low. In a separate bowl, whisk two eggs. Pour eggs into the pan containing the onion, garlic and tomato — add 1 ounce low-fat cheese, if you wish. Stir continuously until eggs are cooked. Pour over toasted, whole rye bread.

Tallmadge's most recent Op-Ed was "Is BMI Best? 8 Steps to Your Healthiest Weight,"and her additional contributions are available on her profile page. Her latest book is Diet Simple Farm to Table Recipes: 50 New Reasons to Cook In Season. The views expressed are those of the author and do not necessarily reflect the views of the publisher. This version of the article was originally published on LiveScience.