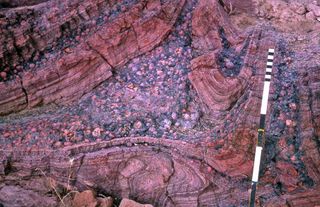 Evidence of flowing lava hardened into rock found in Idaho several miles away from the site of an 8 million year old supervolcano eruption at Yellowstone. The lava was itself formed from superheated ash from the eruption.
(Image: © Graham Andrews, assistant professor at California State University Bakersfield. )

Ash from supervolcanoes dwarfing any volcanoes on Earth today could have been so hot that it turned back into lava once it hit the ground miles from an eruption, new research suggests.

Supervolcanoes are capable of eruptions surpassing anything seen in recorded history, expelling thousands of times more magma and ash than even the biggest of modern-day eruptions. A dozen or so supervolcanoes exist today, including one sitting dormant under Yellowstone National Park in the western United States.

After a volcano erupts, lava typically flows directly from the site of the outburst until it cools enough to harden in place. However, scientists unexpectedly found signs of an ancient lava flow in Grey's Landing, Idaho, miles away from a supervolcano eruption near Yellowstone that happened about 8 million years ago.

Past research bizarrely suggested this lava flowwas made of ash spewed during the eruption. Now scientists have discovered how this was possible. [50 Amazing Volcano Facts]

"During a supervolcano eruption, pyroclastic flows, which are giant clouds of very hot ash and rock, travel away from the volcano at typically 100 miles an hour," researcher Genevieve Robert, a petrologist at the University of Missouri at Columbia, said in a statement.

The ash should cool off too much in the air to turn into lava right as it lands. In this case, the researchers suspect an effect known as viscous heating forced the ash to become lava.

"We determined the ash must have been exceptionally hot so that it could actually turn into lava and flow before it eventually cooled," Robert said.

"I am just fascinated by the idea of magma exploding out of a volcano, traveling very fast as a dense ash cloud for perhaps tens of miles, and then being deposited very rapidly, welding and starting to flow like lava but without a direct connection to the volcano it came from," researcher Alan Whittington, a petrologist also at the University of Missouri at Columbia, told LiveScience.

Here's how the ash gets so hot: Viscosity is the degree to which fluids resist flow, and the higher the viscosity, the less it can flow. For example, water has a very low viscosity, so it flows relatively easily, while molasses has a higher viscosity and flows more slowly.

A highly viscous substance resists flow, which means that any energy forced onto it that does not make it move can heat it up. For instance, imagine stirring a pot of molasses.

"It is very hard to stir a pot of molasses and you have to use a lot of energy and strength to move your spoon around the pot," Whittington said in a statement. "However, once you get the pot stirring, the energy you are using to move the spoon is transferred into the molasses, which actually heats up a little bit. This is viscous heating."

The ash from a supervolcanic explosion travels very rapidly, "so once it hits the ground, that energy is turned into heat, much like the energy from the spoon heating up the molasses," Whittington said.

The phenomenon may not be exclusive to supervolcanoes. Viscous heating "is probably active to some degree in all magma or lava flow, fast or slow," Robert told LiveScience.

Volcanic ash needs to be at least 1,500 degrees Fahrenheit (815 degrees Celsius) to become lava. The researchers calculate viscous heating could heat ash by up to 450 F (250 C).

"This is an extreme example of mechanical work being converted to heat," Whittington said. "This phenomenon of viscous heating has been known about for many years, but mostly ignored in computer models of volcanic processes because it is usually assumed to be negligible. In this case we calculate that the heat generated could be as much as 1 megawatt per cubic meter, which is an incredible amount of energy, until you remember that we're talking about a super-eruption."

Whittington said he is now examining "the phenomenon of recalescence — heating due to rapid crystallization — and assessing how important it might be in lava flows on Earth and other planets."

The scientists detailed their findings in the September issue of the journal Geology.