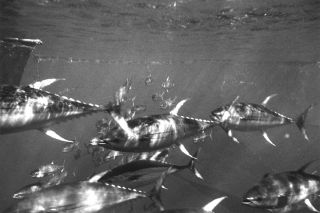 Fish that spend much of their time in the deep ocean — like bigeye tuna — are more likely to contain higher levels of mercury, and scientists have now discovered why that's the case.

New research shows that much of the ocean's organic mercury, known as methylmercury, is produced in the deep ocean by microbes; fish that feed there pick up more of this heavy metal than those that stay close to the surface, said Brian Popp, a geochemist at the University of Hawaii at Manoa, who studied the issue.

But the microbes don't create the substance themselves. Rather, they convert elemental mercury, the substance found in old-fashioned thermometers, into organic methylmercury, the form that's toxic to humans, Popp told LiveScience.

Accumulating up the food chain

Methylmercury gradually accumulates in fish and increases in concentration as one fish eats another —so bigger, older, carnivorous fish like swordfish are more likely than sardines, for example, to contain more of the toxin. But the depth at which the fish feed is also important, and the new study explains why, Popp said.

Mercury arrives in the ocean from a variety of sources, such as air and water pollution and naturally occurring minerals. But the study, published Aug. 25 in the journal Nature Geoscience, found that much of the ocean's mercury comes from air pollution, especially from power plants in Asia, said Popp, co-author of the study.  [World's 10 Most Polluted Places]

"This study reinforces the links between mercury emitted from Asian countries and the fish that we catch off Hawaii and consume in this country," Joel Blum, the study's lead author and an environmental scientist at the University of Michigan, said in a statement.

Methylmercury is broken down by sunlight, and much of it is produced below the depth at which light penetrates the ocean, Popp said. In the North Pacific, where the study took place, the depth of this layer of darkness ranges from 300 to 800 meters (984 to 2,625 feet) below the surface, he added.

Exactly how light breaks down methylmercury is unclear, although the process probably involves the creation of free radicals, reactive chemical compounds that are notorious for their ability to promote decomposition, said Robert Mason, a marine chemist at the University of Connecticut who wasn't involved in the study.

Mercury takes hundreds to thousands of years to go from the coal in power plants into the deep ocean, where it's converted into toxic methylmercury, researchers said. It is also a notoriously volatile pollutant, cycling among the soil, air and water. One study published in May in the journal Global Biogeochemical Cycles found that more than half of the mercury that ends up in the ocean each year is re-emitted from the soil or the water.

Therefore, any reductions in mercury pollution would take years to have an effect on the environment. Current estimates suggest that mercury levels in the Pacific Ocean are likely to double by 2050, according to the study.

"It gives us even more impetus to do something sooner than later," Mason said.

The study pinpointed different sources of mercury by examining the multiple isotopes of mercury found in fish from waters near Hawaii. The exact mix of mercury isotopes (chemical variants with the same number of protons but a different number of neutrons) varies by origin and location. For example, mercury isotopes found in Asian coal plants differ from those derived from naturally occurring minerals, so researchers were able to trace much of the mercury back to Asian coal plants, Popp said.