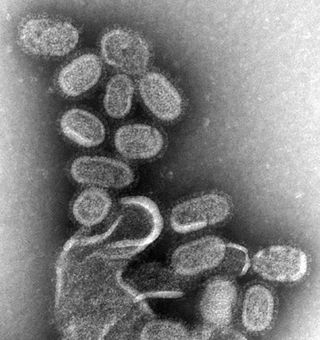 Flu season is just around the corner, and fears have never been higher.

An avian flu virus is winging around the globe and could reach the United States next year. It is likely, scientists say, that the virus will morph into a form easily transmitted by humans. Were that to occur, officials fear a global pandemic that could kill millions.

But just what is the flu? How does it infect people? How deadly is it? And how can you protect yourself?

In a three-part series this week, LiveScience looks at the science behind the flu and why experts are so concerned.

Many people think of the flu as a winter disease since incidence typically peaks from December to March. It’s actually a year-round problem.

But people tend to stay indoors more in the winter, making person-to-person transmission of the disease, which is caused by a virus, easier, said Jennifer Morcone, a spokeswoman for the Centers for Disease Control and Prevention (CDC).

The virus is most commonly spread in liquid droplets made airborne by coughing or sneezing. Symptoms – such as fever, body ache, extreme fatigue, sore throat, and dry cough – begin showing in adults one to four days after being infected.

An adult can begin spreading the virus one day before and three to seven days after symptoms show, and children can remain contagious even longer. Some infected individuals show no symptoms, yet they can still spread the virus to others.

Each year anywhere from 5 to 20 percent of the U.S. population gets the flu. Anyone can contract it, but children, the elderly and people with chronic medical conditions are more likely to experience complications, such as pneumonia, bronchitis, and sinus and ear infections.

The flu can also worsen chronic health problems – asthmatics are more likely to have asthma attacks and people with chronic congestive heart failure may have their condition worsen.

On average, 36,000 people in the United States die from influenza and related complications each year, according to the CDC. More than 200,000 are admitted to hospitals for treatment.

A pandemic in 1918 killed more than 20 million people worldwide.

The flu is sometimes confused with the common cold, and for good reason. Both are respiratory illnesses brought on by viruses. They share many of the same symptoms, and it is nearly impossible to make the distinction based on the variety of symptoms alone.

Flu symptoms, however, are generally more intense, especially fever and fatigue, and can lead to dangerous complications.

Influenza is a virus – a pack of protein and DNA that lacks the ability to self-reproduce. So it infects a cell, hijacks the inner machinery and uses it to reproduce. The virus reproduces until there are so many copies that the cell bursts and the virus spills out, spreading to other healthy cells.

There are three types of influenza viruses: A, B, and C.

Type A: Infects people, pigs, birds, horses, seals, whales, and other animals. Wild birds are natural hosts. Divided into subtypes based on two surface proteins – hemagglutinin (HA) and neuraminidase (NA). There are 15 HA and 9 NA subtypes, and these can be combined in various ways. Currently, the three most common subtypes in general human circulation are H1N1, H1N2, and H3N2. These can cause epidemics – defined as a high incidence of disease in an area or population – and also a widespread geographic or global disease called a pandemic.

Type B: Normally occurs only in humans. No subtypes. Known to cause human epidemics, but not pandemics.

Type C: Only causes mild respiratory illness in humans, and is not included in flu vaccines. Not capable of epidemic or pandemic spread.

Types A and B are further characterized into genetic variants called “strains.” New strains are constantly evolving and take the place of older ones. While your body may have built up resistance against one strain, it may not be able to fend off its replacement.

The avian strain that has been found in much of Asia and parts of Europe is called H5N1. It has killed at least 67 people, who were in most cases handling diseased birds.

What it is and how it affects us.

How to prevent and treat the flu.

How flu could become a global killer.